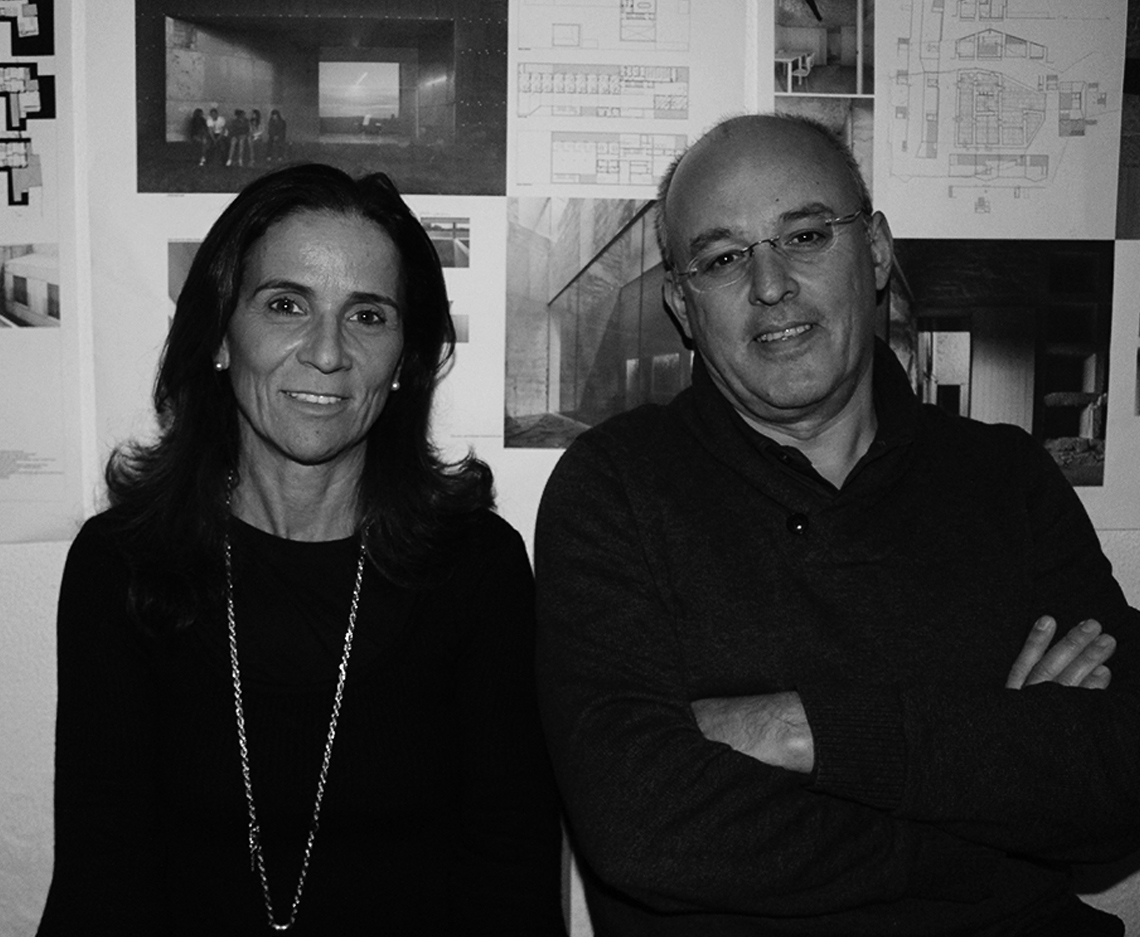 Elizabeth Abalo and Gonzalo Alonso are qualified graduated from the Technical School of Architecture of the University of Navarre, with a professional studio in Santiago de Compostela since 1997. Gonzalo Alonso has been a Final Project professor at Cesuga, University College Dublin and both in the Master of Sanitary and Assistance Architecture in the University of A Coruña. They have obtained various awards in competitions related to urban planning, public space, endowment buildings or residence. Among the latter, the Rehabilitation of the Faraday Building and the new Headquarters in Berbés for the University of Vigo or the Romaño Civic Center in Santiago de Compostela, which was recently inaugurated. His work has been recognized with numerous national and international acknowledgments, among which the 2017 Prize from the Third edition of the Baku International Architecture Award for the Romaño Civic Centre, the A Prize of the Milan Triennial for the Monterroso Health Centre in 2015, the Ischia International Prize for Architecture, in Italy in 2014, for the rehabilitation of the Moure Hotel or the Urban Regeneration and Sustainability International Prize for the Accessible Ribadeo intervention in Bologna (Italy) in 2013. They have been Highly Commended in the AR+D Awards in London and nominees for

the German Design Award 2015 in Frankfurt (Germany). In addition, the Caramoniña Allotments were awarded at the XIIISpanish Biennial of Architecture in 2016 and the Building for Housing and Day Centre Facilities for Youth and the Elderly in As Pontes obtained the AVS Award for the best socio-community building in Spain in 2013. Other projects such as the Rubido Romero Foundation, the Nursery on the Ourense Campus and the Oleiros Health Centre also received various awards. To them we should add the National Cultural Heritage Award granted by the Ministry of Culture to the Santiago Municipality in 2009 for a set of constructions amongst which is the San Clemente Square, developed by their studio. Elizabeth Abalo and Gonzalo Alonso have exhibited and presented their work in Spain, Great Britain, Italy, Germany, the United States and Japan. His work has been published in various national and international media.

Elizabeth Abalo and Gonzalo Alonso receive CORTIZO ARCH in their studio in Santiago de Compostela from where they have designed dozens of constructions which accumulated numerous national and international recognitions. The last winner was the Romaño Civic Centre, awarded at the Third edition of the Baku International Architecture Award as the best public architecture project. Almost coinciding with this award, the Romaño Civic Center opened its doors to the residents of this Compostela neighborhood.

Coinciding almost with this award was the Roma Civic Center opening. You were present at the launch, what feeling did the future users of the site convey to you?

The first impressions could not have been more satisfactory. Truly, everyone was delightful with us. While it is true that it was a day of celebration, we had already had previous contact with many of them and they had always expressed their satisfaction.

What are this project's architectural foundaments?

We believe that there are at least two: on the one hand, it meets the demands of the neighborhood in terms of space endowment, but, on the other, it does so in a flexible way, which facilitates both its use and the appearance of new activities. In a more disciplinary aspect, we were interested in using load-bearing walls, with ceramic interiors or a slate exterior, as well as the multiplication of views and expansion of spaces generated by its different openings.

What is evident is the commitment to simplicity, a feature that can be extended to all of your work. That style of contained architecture, is it the leitmotiv of your office or is it determined by the socioeconomic context that produced it?

We believe we've been comfortable with this feature from the star. We started our activity before the crisis and we followed the same fashion even then; with some formal and, of course, economic containment.

Your professional activity started at the end of the 90s and, during the two last decades, you have developed projects for all kinds of uses: residential, health, educational, cultural, hotel... Was that evasion of specialization what allowed you to survive the harsh crisis of the sector?

That is possible. We have also carried out rehabilitation projects from the start, so by the time they began to be the majority, we already had some experience. On the other hand, since ours is not a large office, we have been able to adapt to a variety of orders and budgets.

Your collective housing proposals are remarkable, executed in several cities, in which, from the start of the project, they combine residential use with a day center for the elderly in the same building. How did you solve this multifunctionality?

With a lot of discourse with the parties involved; at least two Ministries of the Regional Government and the respective municipalities, all of them with different objectives. In Galicia it was a novel programme, so it was necessary to take into consideration or adjust regulations and deadlines. But the result, at least on our part, we believe is satisfactory. The youth and the elderly have more issues in common than we often think. 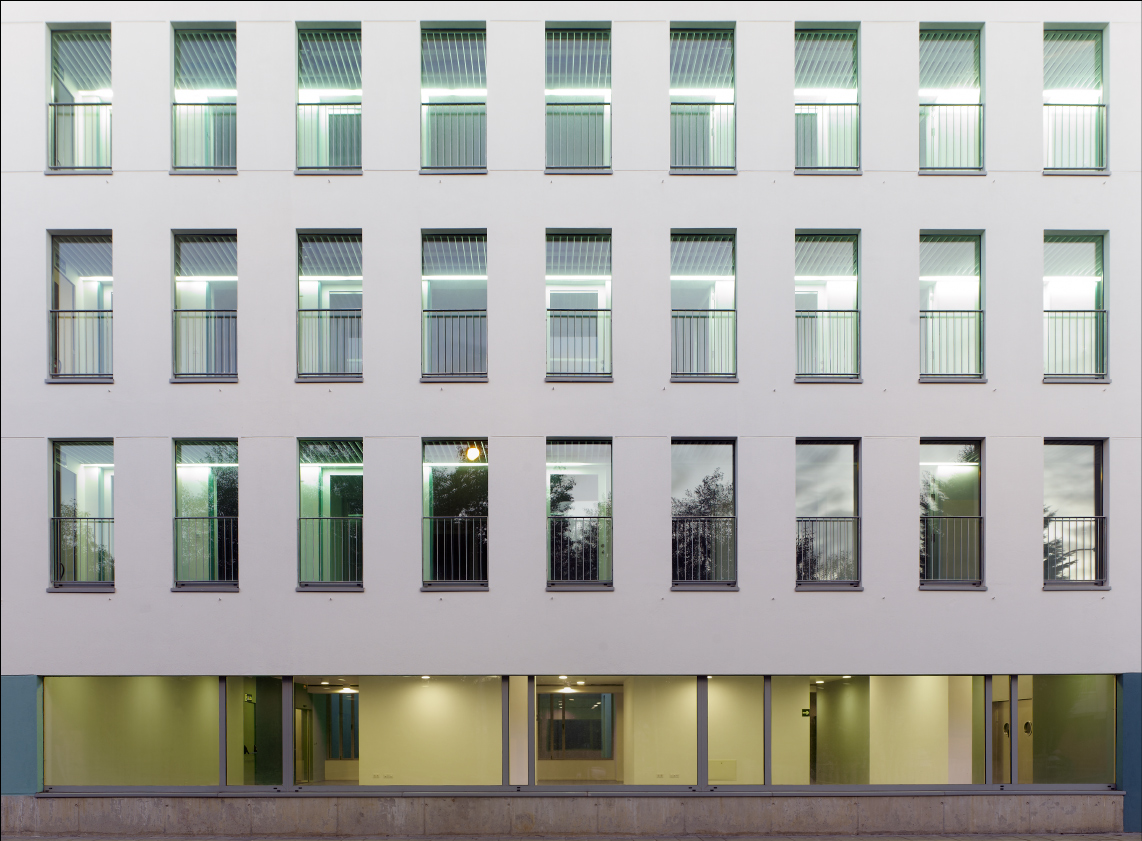 Your proposals for sanitary architecture have also been highly applauded. In your perspective, what should the hospitals or health centres of the future be like?

This field has always interested us a lot, but although as you say we have had a couple of proposals with some recognition, I really don't think we are experts, at least in large infrastructures. In any case, we believe that they should at least be kind, with all that implies. They possibly are the orders in which the user should be most taken into account, since it is the user who in most cases is forced to make use of the building and in delicate conditions. Therefore, they must be serene, functional concepts with a high incidence of natural light.

Let's talk about rehabilitation and a project we are especially proud of, as is the case of the Hotel Moure, in which our carpentry shops are present. In this construction, whose result gave you great international repercussion, you had to offer a third life to the building. Intervene on the intervened. What a challenge! Right?

Indeed, although we have the support of a great client. Still a few weeks ago, he sent us the link to a report in a German travel magazine. They are a family with experience in the field, they were clear about what they wanted and, even so, they let us work freely. We were able to propose alternatives, discuss them with them, etc. We are very satisfied with the final result, which, of course, did not depend only on us. Kúpula did a great job as a builder and the aperture of the backyard, the true heart of the building, would not have been the same without your carpentry.

From your office you have also made proposals in the field of public space planning and landscaping that have earned you important recognitions. The last one, the European Award for Architectural Heritage Intervention for the Caramoniña Allotments in Santiago. What plan of action did you propose for this space?

The situation was complicated at first. No one knew what to do there. It was classified as an endowment space, but access was difficult. It is a possibility that when considering the recovery of the orchards we were in the right place at the right time. It was an endowment that was already being considered, perhaps more unofficially, in other cities or even in other parts of Santiago. And we may have had the right plot. Getting to develop them in Caramoniña solved several problems in one fell swoop: accessibility, usage, public endowment... and all that with budget that was beyond tight.

The truth is that I do not know if it is intended or coincidental, but Santiago de Compostela appears as a key place in your work, where you have made numerous interventions. Is there a special responsibility to acting in a city with such an important historical heritage? 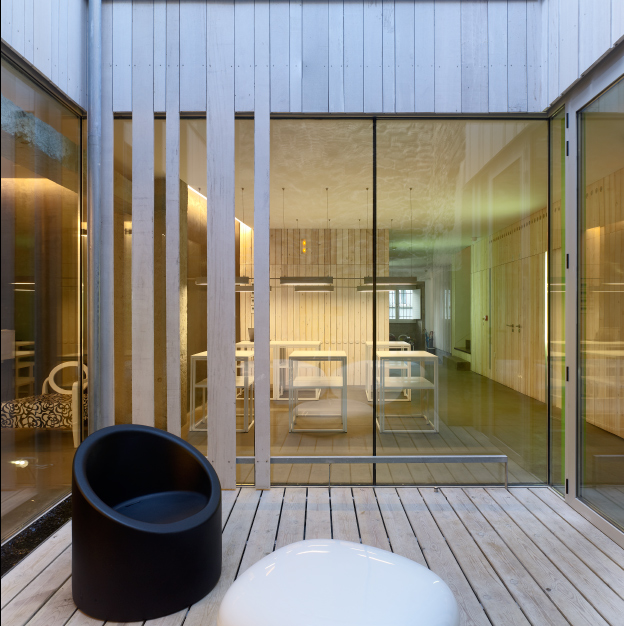 As we have previously discussed, we have been present in the world of rehabilitation since our beginnings. This has allowed us to understand it in a natural way; with respect but without fear. On the other hand, Santiago is a city with a long tradition of intervention in heritage, from which we have been able to learn a lot as well as from many partners. We have always felt comfortable and shielded in that regard. Having the studio in Santiago, without a doubt, makes things easier; Although we have moved without problems throughout Galicia and, in fact, it even took a while to build our first construction here.

And with so many international recognitions and in an increasingly global world, are you not planning to make the leap abroad in the future?

We have made some attempt and will undoubtedly continue to insist. Perhaps for an office like ours it is somewhat complicated at first, but we hope to consolidate some alliances that would allow us to continue trying. In this increasingly widespread internationalization.

What is an extra value that Spanish architects can provide?

There are at least two significant matters. On the one hand, what some countries call integrated design. In general, Spanish architecture has had a long tradition of combining design and technique. This allows us not only to propose architectural interventions, but also to integrate other aspects that deal with structure, facilities, or urban planning. And this greatly facilitates teamwork, transversality. And on the other hand, flexibility. That ability, sometimes misunderstood, to move in uncertainty, in change. That possibility of understanding problems as opportunities in constructions or ongoing projects.

What projects are you currently working on?

We have a series of projects that we are facing with great enthusiasm. Some of them in fields we have never worked in or with new clients. The construction of a new nursery school in A Estrada (Pontevedra) is well advanced, which we hope to finish in the coming months and we have just started the construction of the new headquarters of the University of Vigo in Berbés; an intervention project in the built heritage, on the maritime front of the city. For this same client we are developing the Faraday Building project, which will be the first intervention in a former Navy facility. On the other hand, shortly we will begin the assembly of an artistic exhibition in the Museum of the City of Culture of Santiago, our first sortie into this field. In addition, we are working on a housing rehabilitation project in Betanzos, another on accessibility in Santiago and two pending contests to which we were invited in San Sebastián and Barcelona. These are very diverse projects, of different scales, in different cities, but all of them very exciting.