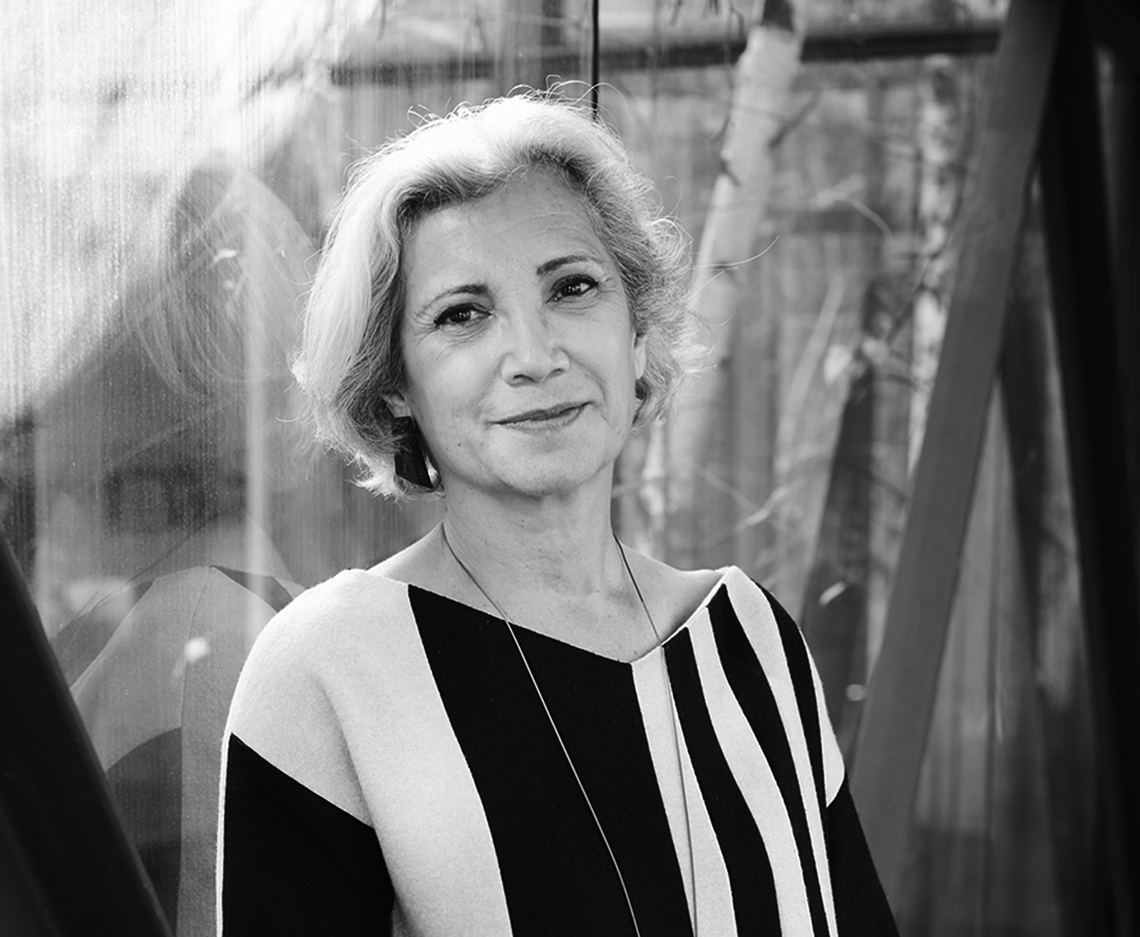 After graduating in architecture and urban planning from the Barcelona School of Architecture, ​​Carme Pinós began her professional career with Enric Miralles, achieving international recognition with projects such as the Igualada Cemetery. In 1991 she established her own architecture studio, undertaking a vast range of projects that range from urban reforms and public works to furniture design. Among her most prominent recent projects you can find the ensemble in the historic center of Barcelona which includes the Gardunya Square, the Massana Arts and Design school and the rear façade of the Boquería Market, the Department Building on the WU Campus in Vienna, the Delegation of the Generalitat of Catalonia in Tortosa and the Cube I and Cube II Office Towers in Guadalajara. Throughout these years, she has received numerous awards and distinctions such as the Neutra Medal for Professional Excellence awarded by the Polytechnic University of California at Pomona in recognition of her professional career (2016), the Berkeley-Rupp Prize for her contribution to the promotion of women in architecture and her social commitment (2016), the Creu de Sant Jordi for her contribution to the culture and defense of the civic values ​​of Catalonia (2015),

Carme Pinós has combined her activity as an architect with teaching, being a guest lecturer at, among other places, l'École Nationale Supérieure d'Architecture Paris-Malaquais, Harvard University Graduate School of Design, Columbia University in New York, l'École Polytechnique Fédérale de Lausanne, l'École Nationale Supérieure d'Architecture Paris-Val de Seine and Università de Venezia. At the same time she has participated in numerous national and international seminars, courses, workshops and exhibitions. It is also worth noting the presence of her work in outstanding museum collections; in 2010 the Center Pompidou in Paris acquired a selection of her scale models corresponding to the projects of Caixaforum Zaragoza, Hotel Pizota (Mexico) and Maison de l'Algerie, while in 2006 the New York MOMA bought for its collection

"Architecture stems from a social demand

to which we must respond"

One of your last projects, the MPavilion 2018, has just been inaugurated, which is commissioned each year to an international figure in architecture who gives their vision of art, design and debate. How did it come about?

The truth is that it took me completely by surprise. I received a call from Naomi Milgrom asking me if I was interested in making a pavilion and I answered yes without hesitation. Sometimes these things happen to architects, we receive calls that leave you surprised. Someone has seen your website and they like your work, or they know about you through other means, and they end up contacting you to do a project for them. In this case, Naomi later implied that Murcutt had spoken highly of me to her and suggested my name.

After accepting the assignment, I traveled to Melbourne to see the place where the project would be installed, to know its needs and also the pavilion that had been built the previous year in that space, information with which I began drafting the project.

What are the keynotes to the proposed proposal?

I have tried to be simple and rich in effects at the same time. I was very impressed by the location when I saw it, a park with the whole Melbourne skyline in the background, with continuous grass, but with small mounds where people often sit and gather. After that, I proposed an open pavilion, I did not want a closed space, but I did have to have a roof so that people do not get wet, since it rains a lot in Melbourne. So I started to play with the idea of ​​water, with the idea of ​​a transparent roof that allowed the rain to be seen and at the same time played a game of shadows. It is a very simple proposal with two planes that cross each other, each resting on the leg that is formed from their bending and on a mound. As a result, a play of light and shadow has been achieved, seeing the water fall... it is a dialogue with nature. Regardless of whether it is raining, sunny or cloudy, under the pavilion you feel sheltered and immersed in nature at the same time. It is also an event space, since a multitude of activities can be carried out there; I am very happy with the reception. 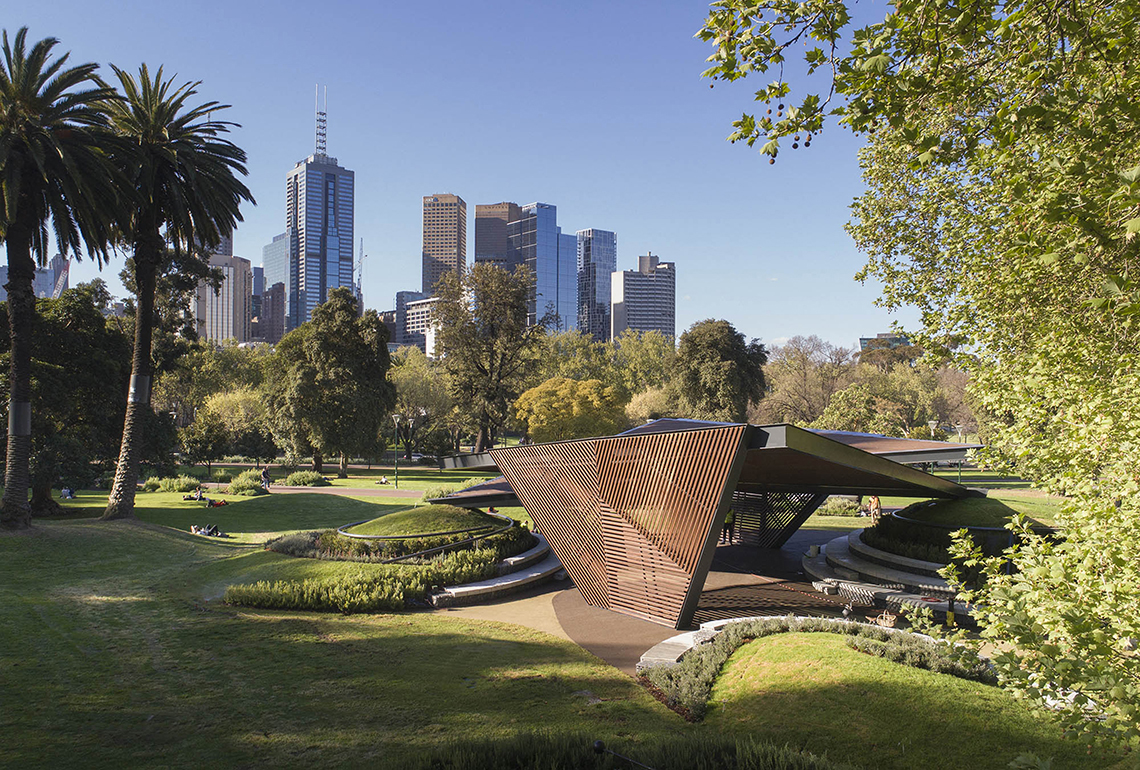 Currently, statistics indicate that there are already more women than men studying architecture in Spain. However, you were one of the pioneers in your time...

When I studied we were four women among more than two hundred students, but things have changed very quickly. Recently, in Barcelona, ​​I was part of the jury of some awards organized by an Iranian magazine in which proposals developed in Europe and Asia were recognized. They were projects that we blindly awarded, without knowing who was behind. When their authors were revealed, I was very happy, since most of them were young and female. Things have changed a lot today, not only in architecture, but also in construction. In my time it was practically impossible to see a woman as a construction manager and today it is completely normalized.

Let's talk about your early steps. You come from a family that loved art, but linked to medicine. Why an architect and not a doctor, for example?

In my family there were no precedents for architects. My father, who had been born in 1891, wanted to be a bridge and road engineer, but to carry out those studies at that time he would have had to leave Barcelona. His family did not allow it and he ended up studying medicine. I don't know if it was this that made him want his offspring to be an architect, I suppose so. We are three brothers, it seemed that the eldest would be the one who would have to fulfill my father's wish, but he chose to follow in his footsteps and become a doctor. When my brother made that decision, I already assumed that I would have to be an architect.

Did you have vocation?

I had an immense vocation for art. From a very young age I loved visiting towns and see their monuments with my father. I made the decision to be an architect at14 years old and I never rethought it, it was in my DNA.

And did you dream back then that you would end up becoming one of the country's leading architects?

I never dream of anything (laughs). I just care about what I'm doing right now and doing my best. Everything takes a lot of effort, so it is better to focus on what you are doing than to imagine what may happen in the future.

Who have been your architectural references?

In my formative stage, when I still wasn't very clear about what I wanted, I was constantly looking for references and studying the architecture of others. I looked a lot at the work of 50s and 60s authors, Le Corbusier, Richard Neutra... I trained with them and they are in my DNA.

How would you describe your architecture?

My architecture, more than a language or a style, is a philosophy; that of having a lot of respect for the environment, being very aware of the responsibility that being an architect implies and bearing in mind that it always stems from a social demand to which we have to respond. I like to being strong, but not imposing, I try to make the architecture that we do in my studio be a dialogue of two or three elements, as in the MPavilion, for example. The projects we carry out seek simplicity, not elementality; they are simple, but with a wealth of effects; we play with natural light and create dynamisms, we flee from symmetries. 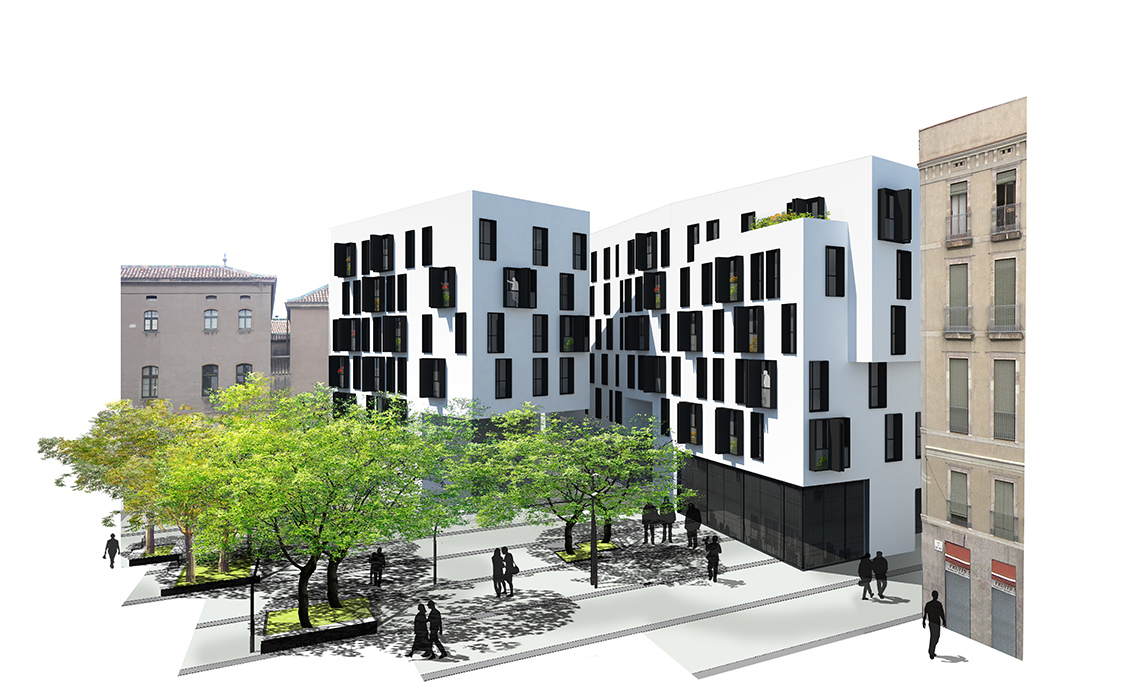 That philosophy of architecture is reflected in one of her most recent works: the intervention in Gardunya Square in Barcelona, ​​a comprehensive project of which a residential building is part, which by the way has carpentry from our brand. What would you highlight about it?

I am very happy with the result because we have managed to capture exactly what we had imagined. The behavior of the people using it makes me very excited. When I go through the square, there is an area around the entrance to La Massana where all the students gather, and it is exactly what we had thought for it. The square is "divided" by a diagonal, to one side are the trees and corresponds to the tourist meeting area; towards the other, in the area of ​​the Santa Cruz Hospital, where the students are located, we did not want to plant trees so that it would be a square where many things could happen, but also to give prominence to the main facade of La Massana. Apart from that, it's also very nice to see those social houses already inhabited, full of life, with windows installed on some spans that stand out like a kind of box and give a unique air to the façade.

Is making comfortable homes the great challenge of today's architecture?

The truth is that architects have little room for creativity in this area. Both urban planning and city ordinances specify practically everything, from volumetry or height to the width of a corridor. Therefore, it is very difficult to explore with housing projects, there is almost no margin for creation. Between the pressure of the real estate and the amount of urban and municipal conditions, making a home becomes a small drama.

How do you see Barcelona today in urban and architectural terms?

The truth is that we have gotten a bit stuck. There was a time when you could go around the world and, in any city or country, Barcelona was a reference in terms of urban planning; that's history. That 1992 Barcelona that was thought for the Olympics is not the one of today, perhaps we have killed it with success. I am not against tourism, but I am against overcrowding, in my opinion one of the underlying reasons of this image shift. We live a world in which we are permanently traveling, I also include myself, a world in which we are more aware of where to go than where to stay, no identity is created.

Why did you launch Objects?

It was a time when Spain was in recession from the crisis. We had economic capacity, a lot of energy, but less employment. So we launched a collection of products designed, produced and marketed by us. This experience started a bit like a game and ended up being very useful for all the people in the studio. We learned to take care of details, value the profitability of materials, the importance of storage, direct relationship with the client... Objects helped us be better architects. From there, we already dared to design more things than the building itself in many projects. At CaixaForum, for example, we also handled the furniture. 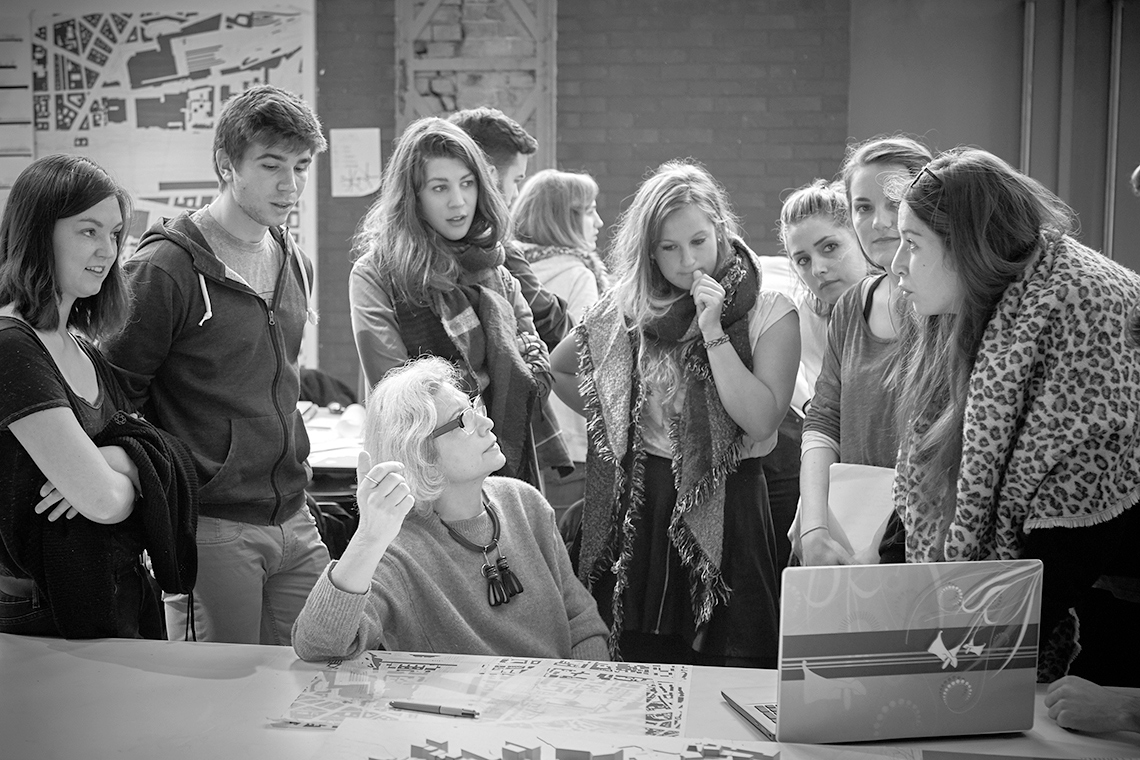