V House is a project by Isabel Collado and Ignacio Peydro (DOSES DE ARQUITECTURA) in charge of designing the rehabilitation and expansion of this single-family home located in Oleiros in the province of A Coruña. Built in the early 1960s, it has become the holiday house of a family that has grown over the years, but still maintains this place as a meeting point on rest days. The original construction was not enough to accommodate all members, hence the need to expand and renovate it. 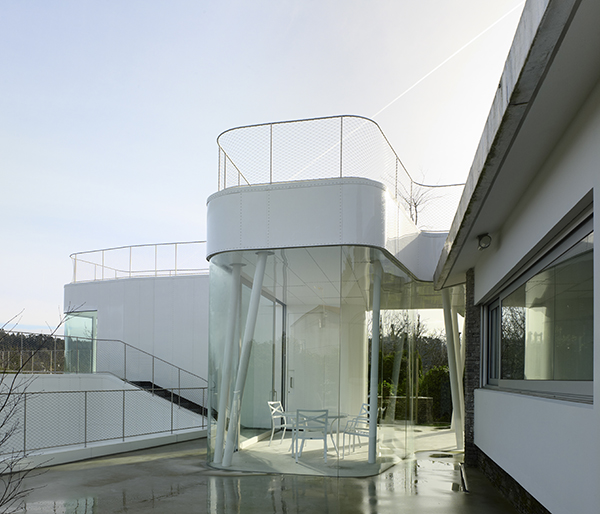 DOSES DE ARQUITECTURA was very clear from the beginning the philosophy on which the project should pivot: to turn V House into a place where three generations of the same family could enjoy their vacations simultaneously. The original house contains the bedrooms of the first generation and the rooms for social and family interaction. The youngest inhabit the extension, consisting of a lateral wing joined with the old building on its northeast edge. The cover of this new part serves as a private garden for the current house as a landscaped response to the existing topography. With this architectural approach it has been achieved that each member of the family can have their personal space, but forming part of a unique set. The new home is procured a continuous flow of a neutral envelope - without edges, without color, without texture - where life and action are protagonists. A multilayer wall defined by a single construction detail serves both as a structure and as a thermal and environmental shelter.

Ignacio Peydro and Isabel Collado proposed a natural heating system for the interior of the house based on the window arrangement, thus making a reinterpretation of the glass galleries typical of vernacular architecture in A Coruña. The V House is conceived as a sustainable construction in which all the elements contribute to achieving maximum energy efficiency, the installed enclosures acquiring great importance in this sense. CORTIZO was the firm selected by the studio to provide solutions to the project in this area.

In the rehabilitated area, where the original house was located, doors and windows of the CORTIZO 4500 Lift&Slide series have also been installed, in a matte natural anodized finish. This system incorporates a fitting that facilitates the sliding of the sash on a stainless steel rail even in the case of heavy weights (up to 400 kg per sash) and dimensions (up to 3.35 m in length and 2.90 m in height per sash). In the open position, the raised sash forces the bearing to operate and allows controlled aeration since there is no contact between the joint and the frame. When closed, it offers a perfect seal around the perimeter thanks to the compressed joints due to the weight of the sash. Its aluminium profiles are provided with a thermal break obtained with the insertion of 24 mm polyamide insulating rods in the frame and 14.6 mm in the sash, reinforced with 25% fiberglass, offering a transmittance value from 1,5 W/m²K.

In its objective of achieving an energy efficient house, Dosis de Arquitectura included other environmental strategies in the project, in addition to the adequate selection of the enclosures described. Thermal insulation is located on the outside of the outer shell, adhered to the concrete wall that provides the thermal inertia of mass inside. On the other hand, the intensive landscaped roof system, apart from integrating the building into the existing ecosystem, adds significant additional thermal and acoustic insulation to the thermal inertia provided by the concrete slab. Likewise, the winding of the wall favors solar incidence reception for a greater number of hours, thus achieving its natural heating due to the greenhouse effect. During the summer, this effect generates air movement due to the pressure difference and cross ventilation. Finally, the installation of solar panels with vacuum tubes has allowed a considerable reduction in the use of conventional fuels.