This building, designed by 1004arquitectos, answers to a social demand from the city of Torrelavega, it is an independent space which houses the Caligrama adult school, which up to now lacked its own headquarters. Located in a relatively run-down urban area, the new centre strives to connect the neighbourhood with the rest of the city, acting as an integrating element.

The Torrelavega Centre for Adult Education and Play-Centre is designed as a new iconic space that materializes a demand of the city and, due to its uniqueness, it arises as a reference for the future of the region. The proposal is viewed as, from an urban level, an access and part of the future Miravalles Park. It conditions the location of the centre and its reduced occupancy on the ground floor, which tries to relieve most of the land in order to hand it over to the city in the form of public space. Faced with the geometric rationality of the Academy, the Play-Centre is integrated into the park as a curved shape that partakes in its more playful character.

The proposal poses a contemplation on education architecture and the conventional way of understanding the educational program as a repetition of spatial elements isolated from each other. The transparent materiality shows to what extent architecture can influence the educational model and its development. A transparency that makes classrooms open educational spaces, allowing to see the eductaion process, reducing noise in transit areas and creating a communal enviroment that improves the active participation of students, as it has been demonstrated in numerous previous works. 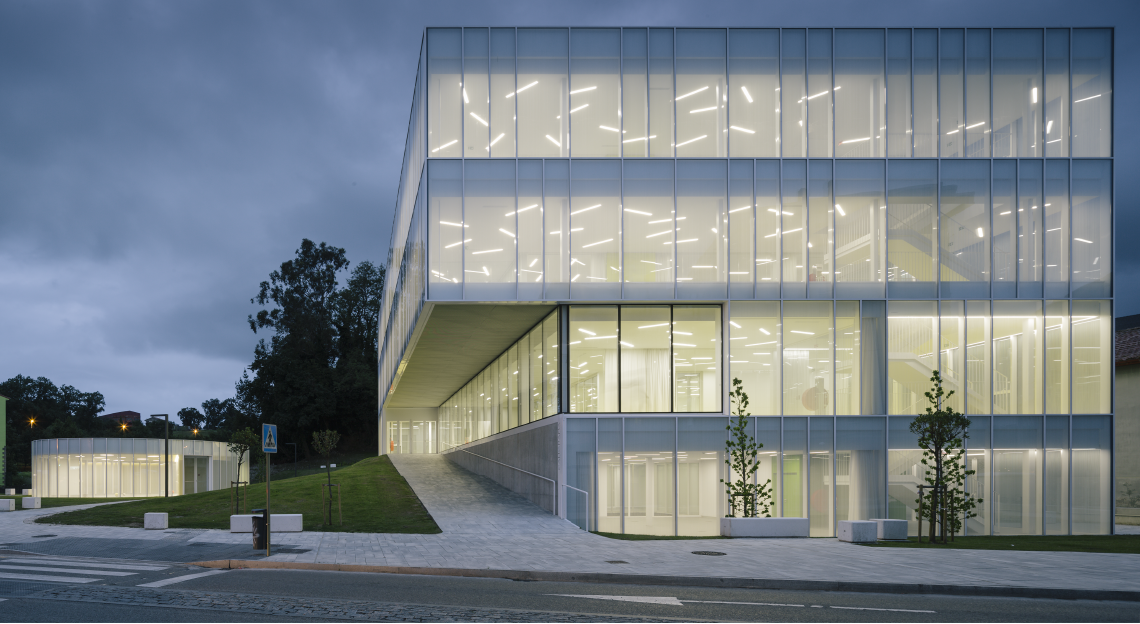 The entire teaching programme is developed in a central core, made up of 5x5 meter units, forming a glass box that encompasses the administrative part on the first floor, laboratories and workshops on the ground floor, and a total of 13 classrooms in the upper two floors. The circulation space and other gathering areas of the project form a perimeter ring around the compact nucleus, simplifying the circulation of the school as much as possible, improving its accessibility and use. The building thus enhances its inclusiveness, allowing the activity of the centre to manifest itself outside, improving the necessary interaction between the school and the city.

The building envelope is proposed as a double skin façade with the distance between both layers being large enough to contain common spaces and circulation areas. The inner layer is made out of laminated glass, with a special acoustic treatment, which encloses the educational programme. Meanwhile, the external layer was resolved with more than 1800 m² of CORTIZO curtain wall, opting for the most part for the TP 52 series, a traditional or stick facade system comprised by aluminium mullions and transoms with a 52 mm cross-section, lacquered in white, which form a supporting structure. The glass is fixed on all four sides by means of a continuous pressure profile screwed from the outside to the screwports incorporated in mullions and transoms. Both the pressor profile and the screws are hidden under the cover cap, also lacquered in white, which forms a lattice of rectangular geometries in the exterior view of the enclosure. The aluminium structure is made of regular-cut sash bars, placed following an alternative rate of 80 and 160 cm, and the transoms appear isolated in the floor in order to avoid the appearance of shorter windows that identify the passage of the slab.

This provides a white pattern with vertical lines, producing a translucent effect that prevents direct sunlight from causing the interior to overheat. At the same time, the pattern of the façade becomes a white veil that gives the building an abstract shape, offering a matte and luminous appearance. Similarly, in daylight, the print motif offers a filtered view from the inside to the outside and produces a slight transparency when viewed from the outside in. However, at night, the effect is reversed and the building turns into a lantern that reveals the interior to the city.

At the main entrance the abstract appearance is broken, the outer skin has a wide cut and therefore offers a direct view of the office areas through a fully transparent glass façade. To achieve this "glass only" exterior aesthetics in this area, CORTIZO's SG 52 system was used, a curtain wall solution in which the glass is fixed to the supporting profiles using the combination of clips and an U-profile placed in the glass chamber.

Meanwhile, the Play-Centre also has a TP 52 façade, but its shape is softer to reflect its function as a leisure space and to help integrate it in a gentler way in the landscaped park. The great variety of profiles and existing mechanical joints for the new generation of CORTIZO façades made it possible to execute the curtain wall with a polygonal configuration with very smooth angles that result in this unique curved structure.

Both the TP 52 and SG 52 façades stand out for their excellent thermal and acoustic benefits, based on their wide thermal break area and the double glazing used. Concerning the exterior, an extra clear silkscreen glass was used, while the interior opted for one with a low-emissivity treatment; both tempered to avoid breaks associated with thermal stress. In addition, elements such as flush mullions and transoms for 1st, 2nd, and 3rd level, continuation parts, pipettes, tear strip gaskets, and the totally vulcanized corner guarantee the absolute watertightness, drainage and water evacuation of the enclosure. 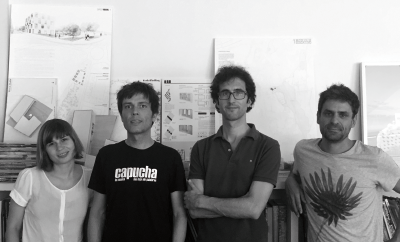 1004arquitectos is an architecture and urban design studio born in 2008 with the vocation of a small collective formed by Coral Álvarez de Miguel, Jaime Lamúa Chueca, Pedro López Quintas and Sergio Soria Soria. The common objectives from which it arises focus on the development of architectural proposals with a point of view that integrates the user, urban transformation, the development of public space and the natural environment in which it is set in.

Pedro López Quintas. Architect from the Technical University of Madrid. In 2008 he began his doctorate in the Project Department, obtaining the Advanced Studies Diploma in 2011. From 2004 to 2008 he collaborated in Rafael Beneytez's studio, with whom he built, as co-director, the 2008 Expo Zaragoza Pavilion in Castille-Leon.

Coral Álvarez de Miguel and Jaime Lamúa Chueca. Architects from the Technical University of Madrid. Both have collaborated since 2002 with various architecture and urban planning offices. In 2007 they founded the study ambienteA3 with which they won the first prize for blocks 2 and 3, 540 homes, in the vicinity of the AVE station in Zaragoza.