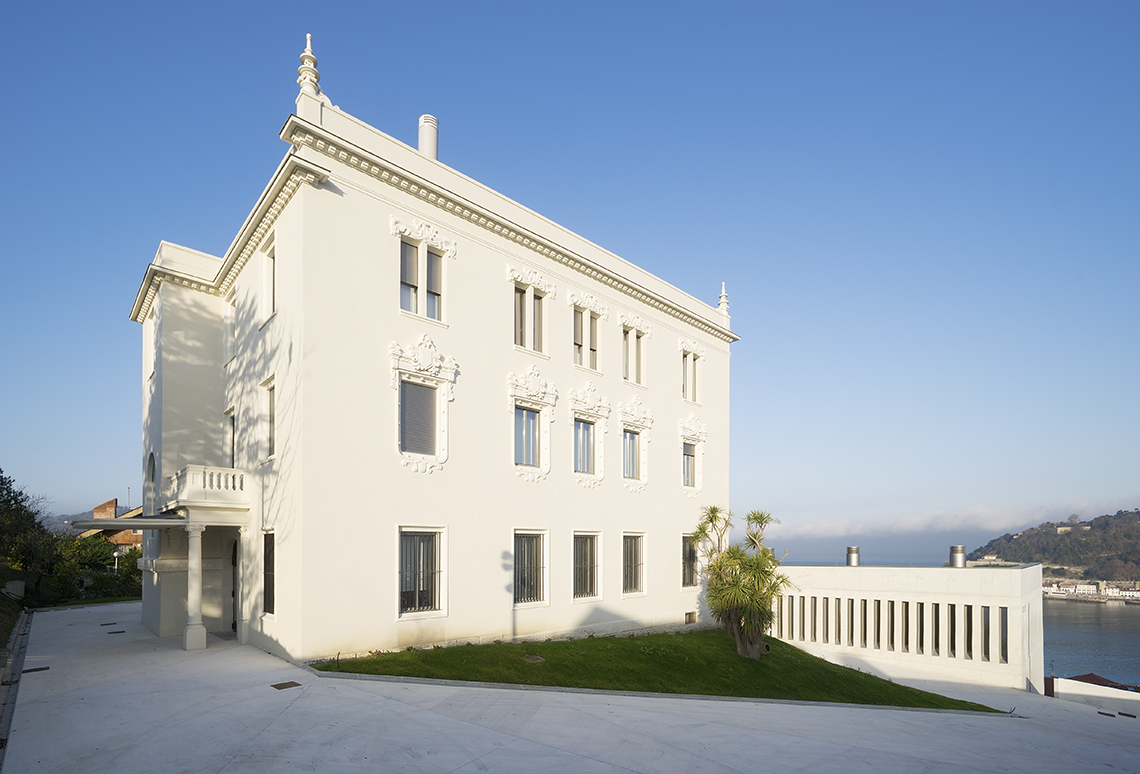 The refurbishment and renovation of the Jaizkibel Student Dormitory emerges from an existing construction, an early 20th century building that was used for teaching functions until now, to which a new structural volume is being added.

With an exceptional location and a magnificent view of the Donostia bay, it is aligned with the regionalist historicism style of the time, dominated by eclecticism. It highlights the quality of its interior space, its decorative finishes' ambition and the elegance of its exterior appearance. Also the way in which it is posed in the landscape, with a very distinct silhouette in the city's likeness from the beach. It is clear that the proposal represents the most successful solution for the future of the pre-existing building, and the most beneficial for the city and its immediate environment from the point of view of its visual and landscape impact, with evident repercussion in the urban context.

The Jaizkibel Student Dormitory, was, originally, a single-family manor with a distinguished style that develops an elaborate language, with remarkable care in the delimitation and cresting of the slabs, with an abundance of moldings and ornamentation. Its interior design revolves around the limelight of a wide and impressive double-height vestibular space, which is deduced from the emptying of the central part of the volume and is finished off with a large horizontal stained glass window with measured, but effective luminosity. The upper floor overlooks this space around its perimeter through a continuous balcony. The main access is located on its perpendicular axis and faces a rhetorical marble perron that covers the height between these two floors and occupies the bottom of the composition's axis.

The project includes the renovation of the existing factory and the introduction into the lot of a new built body, horizontal and recumbent with its back against the terrain, its cover comes in the form of a large terrace open to the horizon at ground floor height. This terrace is delimited in its front by the VIEW CRYSTAL balustrade by CORTIZO, characterized by an attractive minimalist design that meets the highest security requirements of the CTE without depriving us of spectacular views. This system is based on an "U" shaped aluminium profile that holds the tempered laminated glass only on its lower part and incorporates a drainage system that allows water to be evacuated from the exposed terraces. It resists a load of 1.0 kN/m applied to 1.1 m of its lower part. The new volume, due to orientation requirements and taking into account the rainfall, was resolved with a 500 m2 glass enclosure on its north face. a curtain wall solution with integrated aluminium windows that, where it is not transparent, is accompanied by an intermediate sandwich panel and an interior cladding, specifically, the CORTIZO TP 52 system was installed, a traditional façade or stick that was superimposed on a steel structure. The glass was fixed to the structure by means of a continuous pressure profile that is screwed on and hidden under the rectangular cover or ambellishing profile. On the other hand, the flush mullions and transoms for 1st, 2nd, and 3rd level, the continuation parts, the pipettes, the tear strip gaskets and the totally vulcanized corner guarantee the absolute watertightness, drainage and water evacuation of the enclosure. The TP 52 system stands out for its excellent thermal and acoustic performance, based on its wide thermal break area and glazing, in this case, 30 mm; these characteristics are reinforced by the excellent results achieved in the AEV test benches and obtaining the CWCT certification according to the demanding British regulations. The rest of the façades were resolved using a concrete wall in situ of variable thickness, depending on structural needs, with plasterboard cladding.

In order to improve the energy efficiency of the building, aluminium windows with thermal break and double glass in both the existing manor and the new volume were installed. The chosen solution was the COR 70 Hidden Shash by CORTIZO, an Euro-Groove window characterized by a slim profile and an external viewed section of only 66 mm, which enables a glazed surface of up to 85%, Thus achieving an extraordinary luminosity inside the rooms. It has an attractive design that hides the sash behind the frame in the exterior view, making it impossible to distinguish the fixed areas from the openings. Its 35 mm thermal break area and the insert of polyolefin foam in the frame and sash allow it to reach transmittance (Uw) values ​​from 1.0 W/m²K, thus maximizing its energy efficiency. Furthermore, these high thermal benefits are reinforced by acoustic insulation of up to 46 dB thanks to the possibility of installing glass of up to 40 mm thickness. 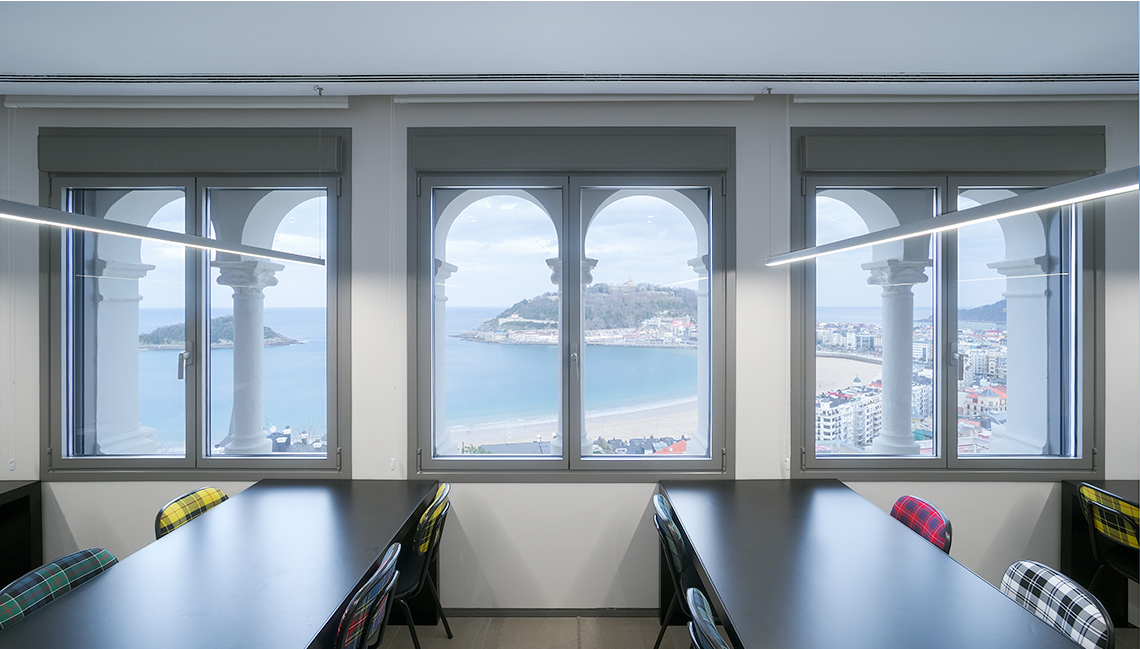 On the other hand, the lot is very close to the limits of the volume; except for its north side, where the access road runs parallel to the main façade. Beyond it, the terrain abruptly falls with a steep green slope that looks out over the bay. The design hastens the exploit of the plot, which involves adapting the building typology to its topography in order to minimize the visual impact of the new construction. The geometry of the site and the generic prescriptions of the Municipal Plan led it to be located in front of the existing building, but avoiding covering the main facade. In addition, an aggressive irruption in the place that affects the image of the city and the skyline of the Miraconcha front, as well as its vision from the lower part of the town centre of ​​San Sebastián, should be prevented. Circumstances determined a building with three of its sides open to face the main uses of the interior. The fourth side, which faces the usual retaining wall, is reserved for corridors and other non-main uses. The new complex fully preserves the common spaces and valuable decoration elements. The exterior centreline on the upper floors is intended for studies and living rooms, apart from certain rooms. The basement centreline houses various technical rooms and the interconnection to the new volume, which presents a linear structure of nature, it functions with three floors that house about 50 individual bedrooms for the students residing in Jaizkibel. 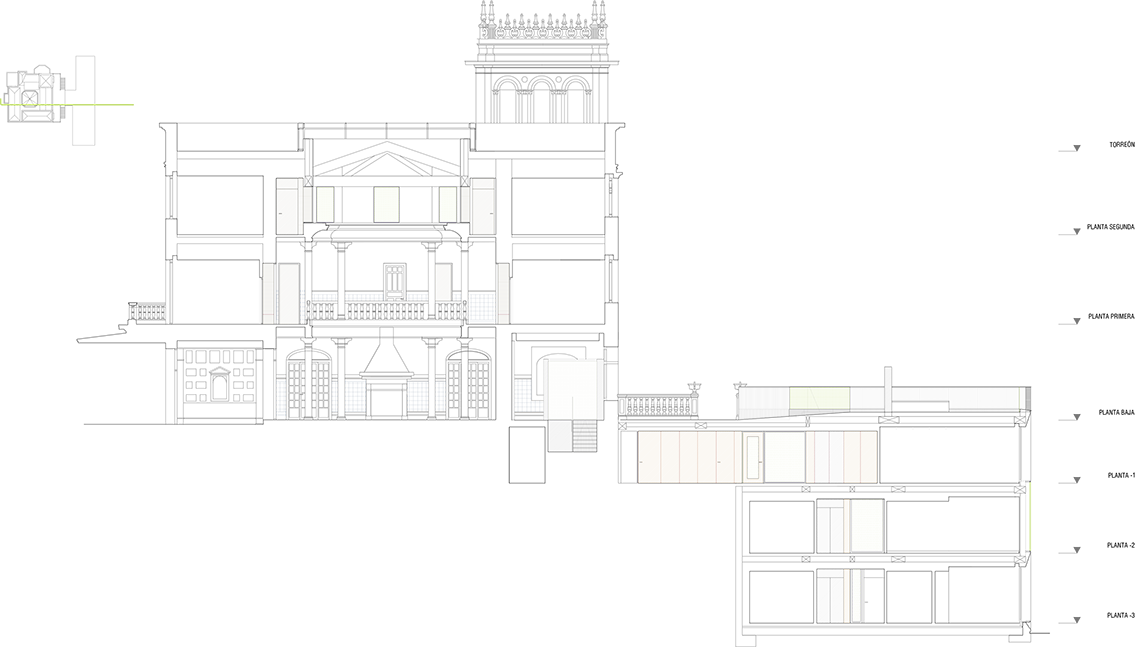 The manor's structure was analyzed and it was found that a century later its stone bearing walls were in good general condition. In any case, all the floors were reinforced and renewed. The façade of the masonry wall of the existing volume was also renovated, completed with the rehabilitation and repair in artificial stone of imposts, cornices and frames; as well as the crest and the cover's pinnacles and the handrails of the stairs that preside over the main access. 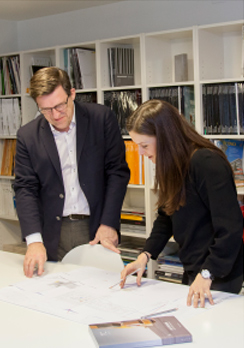 Otxotorena Arquitectos stands out for the development of all kinds of construction work, orienting much of its activity to research and experience in the field of dotacional architecture. The studio is directed by Juan Miguel Otxotorena (San Sebastián, 1959), an architect from the University of Navarra from which he graduated in 1983. He was distinguished with an Extraordinary Award for his Doctorate in 1987. In 1990 he was appointed amongst many candidates the professorship of the Architectural Form Analysis Chair at Valladolid University, where he taught until 1994. From that time until up to September 2009 he was the Director of the Projects Department of the Pamplona School of Architecture at the University of Navarre. In addition, he has obtained from the evaluating bodies of the Ministry of Education his official accreditation as a professor.
Apart from numerous articles on critics and theory in magazines, he has published the following books: "The Classical Discourse on Architecture: Architecture and Practical Reasoning" (1989), "Architecture and Modern Design: The Question of Modernity" (1991), "The Logic of the After: Crisis in Architecture and Culture" (1992), "On Drawing and Design: apropos Projectivity of the Representation of Architecture" (1996), and "The Construction of Shape and Form: for a Contemporary Approach to the Analysis of Architecture" (1999). Involved in editorial initiative since the creation of the company T6 Ediciones, of which he is a founding member, he directed different magazines and collections of specialised books. He is also creator, member and co-director of the AS20 research group, which promotes research projects referred to the 20th Century Spanish Architecture

His work has received numerous recognitions and some of his most relevant projects have been published in various national and international magazines, also accumulating a good number of first prizes in open project competitions, either alone or in association with other architects. On the other hand, a selection of his professional work has been collected in the case study "Juan Miguel Otxotorena, architecture 2000-09" from the "Dédalo '" series by TC Cuadernos (n. 95, 2010).