The new Lecture Hall Tower project was created by Francisco Valbuena, Head Architect of University of Valladolid's Technical Unit, as a collaboration with Tres Arquitectas. It occupies a total area of 5,845 m² distributed over six floors and 34 classrooms which can accommodate up to 2,500 undergraduate students of the School of Industrial Engineering. It is luminous, comfortable, and energy efficient, with close to net zero energy consumption, adapted to new methods of education and new technologies being applied to the students' training.

In the design of the INDUVA lecture hall tower, the cultural, technical and social circumstances of the location have been considered, with the aim of optimising its environmental behavior and its conception as a highly energy-efficient building. For that reason, it has been presented as an almost zero energy building with high internal thermal loads of variable and discontinuous pattern, which gives it a great uniqueness, earning savings in non-renewable primary energy with regard to the Technical Building Code's requirements of 98% in heating, 84% in refrigeration and 75% in lighting, with the addition of the use of renewable energy (connection to the district heating network with biomass from the University of Valladolid, photovoltaic integration and geothermal / aerothermal use through Canadian wells) and the inclusion of optimized building management and monitoring systems.

Structured in three longitudinal bands, the two lateral ones (northeast and southwest façades) group the classroom spaces (and ground floor facilities), while the central band corresponds to the delivery space. A glazed corridor grants interconnection between all floors of the building.

A high-performance building envelope was also designed, including façades with reflective parasols towards the interior roof and living roofs that help reduce thermal gains in summer, as well as the heat-island effect in the environment.

The Lecture Hall tower has already received the GREEN 5 LEAFS certification, which is the highest level of sustainability for buildings in Spain, and is eligible for LEED PLATINUM certification worldwide. Moreover, by being registered within the WELL platform, it makes the University of Valladolid one of the first in the world, along with that of Maastricht (Netherlands) and Miami (USA), to certify the well-being of its students and workers.

In a building whose fundamental premise is sustainability, a high thermal performance envelope is necessary to contribute to this premise of reduced energy consumption. On the façades of the classrooms (northeast and southwest) more than 1,900 m² of CORTIZO curtain wall of the TP 52 and TPV 52 series were installed, a traditional façade or stick system made up of aluminium mullions and transoms with a sight line of 52 mm forming a supporting structure. Therefore achieving the entry of natural light into the interior spaces, assembling a glazed surface from floor to ceiling in the six heights of the building. In the case of the TP 52, the glass is fixed on all four sides by a continuous pressing profile screwed from the outside to the screw ports incorporated in mullions and transoms.

At the same time, the façades are protected from direct radiation by a structure of perpendicular ribs that support lattices, made with die-cut CORTIZO composite panel , which provide optimal shading. It is an efficient, aesthetic and sustainable constructive solution for the covering of building envelopes made up of two aluminium sheets, lacquered on its outer face in orange with PVDF 70/30 paint, and a protective primer inside, with a central core of mineral compound and polyethylene 3 mm thick. In this case, the composite panel has been used both for the configuration of the lattices and in covering the façades in their opaque parts. Since the northwest and southeast faces of the building are almost completely closed, protecting the classroom spaces, opening only in the central corridor areas to provide the user with not only lighting, but also the possibility of exterior views. 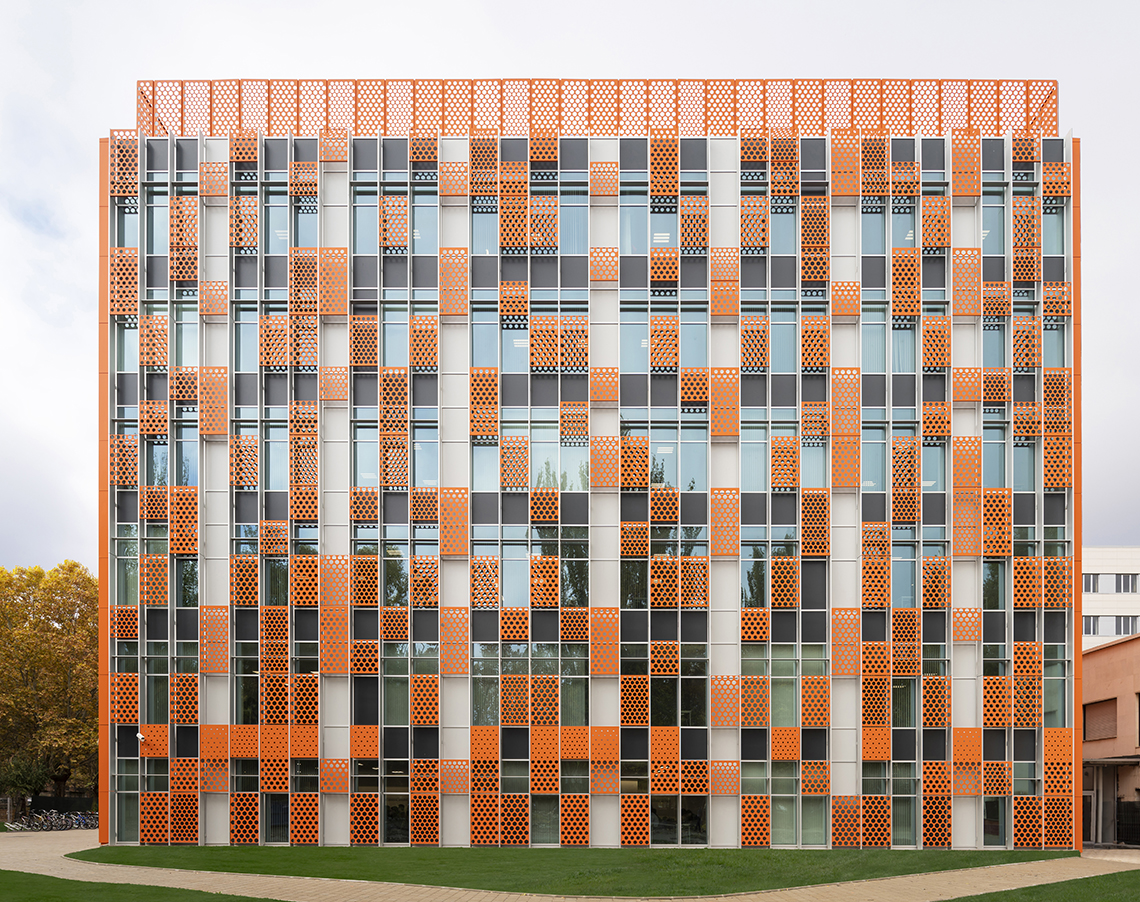 For the entrances to the building, the architects also chose CORTIZO solutions. Specifically, they opted for the Millennium Plus 70 coplanar pedestrian door system, this series has a 70 mm frame depth that stands out for its excellent thermal performance, reaching a window thermal transmittance value of just 0.9 W/m²K made possible by a large thermal break surface with 24 mm polyamide rods. In addition, its large glazing capacity of up to 54 mm reinforces the levels of insulation and protection against noise, offering a maximum acoustic attenuation of 38 dB. All these characteristics are endorsed by the excellent results obtained in the test benches: Class 5 (maximum resistance to soft body impact), one million cycles (resistance to repeated opening and closing), Class 4 (air permeability), Class 6A (water tightness) and Class C4 (wind resistance).

THE CREATORS OF THE PROJECT 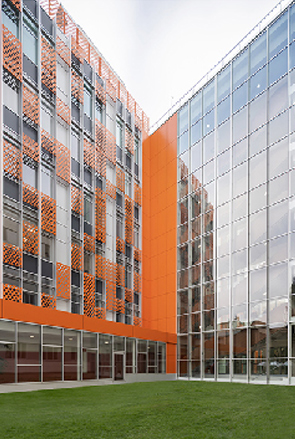 Tres Arquitectas a Valladolid based study dedicated to architecture, urban planning and landscape since 1998, formed by the architects Ana I. Jiménez (master in restoration), María de la O García and Marina Jiménez (doctor in urbanism and master in landscaping). Thanks to their participation in public competitions, they have had the opportunity to develop unique projects in different areas: residential, collective housing, education, health, restoration of heritage, landscape interventions... Their works in progress reflect diversity and public commitment, based on sustainability criteria, integration in context and the intrinsic quality of both the interior and exterior spaces that make up each work. They also carry out other activities, like regulated teaching and courses and workshops (urban planning, artistic expression, design of open spaces, etc.)