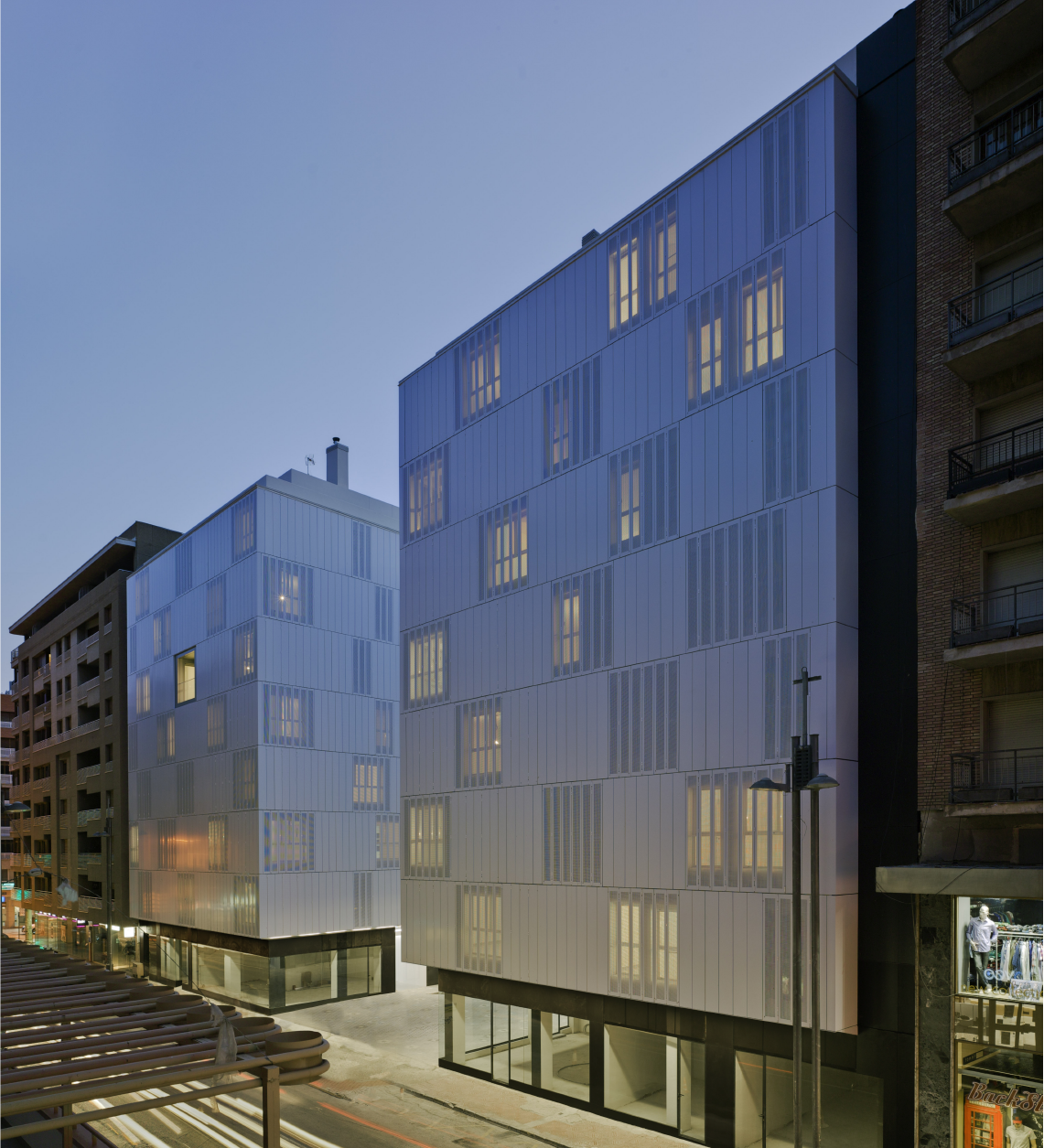 The reconstruction of the San Mateo Housing Complex in Lorca is a project developed by MCEA ARQUITECTURA and NAOS ARCHITECTURE, winners of the design competition instigated in October 2011 by the community of owners of the old housing complex for the reconstruction of their homes. The building's structure had been seriously damaged due to the earthquake that shook the Murcian city in May of that same year, so it had to be demolished.

The old San Mateo Housing was located on Avenida Juan Carlos I, one of the main roads in the city of Lorca, and was one of its most emblematic buildings. In the competition's requirements, the design of the projects was conditioned to be equal to the original building's structure, that is, 6 access gates and 12 apartments per floor (2 per portal), so that each of the owners could recover the position they had previously occupied within the complex. Therefore, the main challenge of the competition lay in the design of a project for inhabitants who had already inhabited that same space for a long period of time, but conditioned by new technical and urban regulations with different and updated requirements and requirements..

The proposal presented by the architects understood the project as an instrument capable of achieving the necessary consensus among all the owners of the building to make its reconstruction viable. To do this, they established as a fundamental step the incorporation into the development process of the experiences and different ways of living that each of their owners developed in their homes over time. Thereby carrying out the reconstruction and occupation of their new homes in the least traumatic way possible. In addition to past experiences, they offered the owners the possibility of incorporating their present and future needs into the project, proposing a flexible plan scheme that would allow, in a large number of cases, the possibility of designing a single home or two smaller ones.

In a first phase, workshops were carried out in which they tried to define the individual needs of each of the residents by filling in forms that reflected all the comments and distribution proposals they considered appropriate. Through this survey, the architects obtained very important information about the needs and the way of living of each of them. After the analysis and classification of all the information received, they began a design process for housing typologies that, being configured according to the individual distribution proposals received, made all the proposals located in the same vertical compatible.

Once these housing models were defined, the architects developed a second stage of work in which they provided the owners with the different typologies defined in the vertical of their apartment so that they could select the one that best suited their needs. Based on these proposals, each of them introduced in the project specific modifications that they considered necessary, resulting in a new building with a usable area of ​​almost 13,000 m² with 97 homes of 45 different types, distributed over 7 floors, with many improvements in both sustainability and safety. In addition, a 1586 m² shopping centre was also included on the ground floor, along with three garage floors with 204 parking spaces and 113 storage rooms.

The participatory design process showed the great interest that all the owners had in showing their proposals and being involved in decision-making, which led the architecture teams in charge of their coordination to make the decision to modify the initial concept of the façade. Thus turning it into a large blank canvas in which the will of each owner could modify the complex, obtaining a comprehensive image in permanent change that reflected the sum of individual wills transferred during the project drafting process. 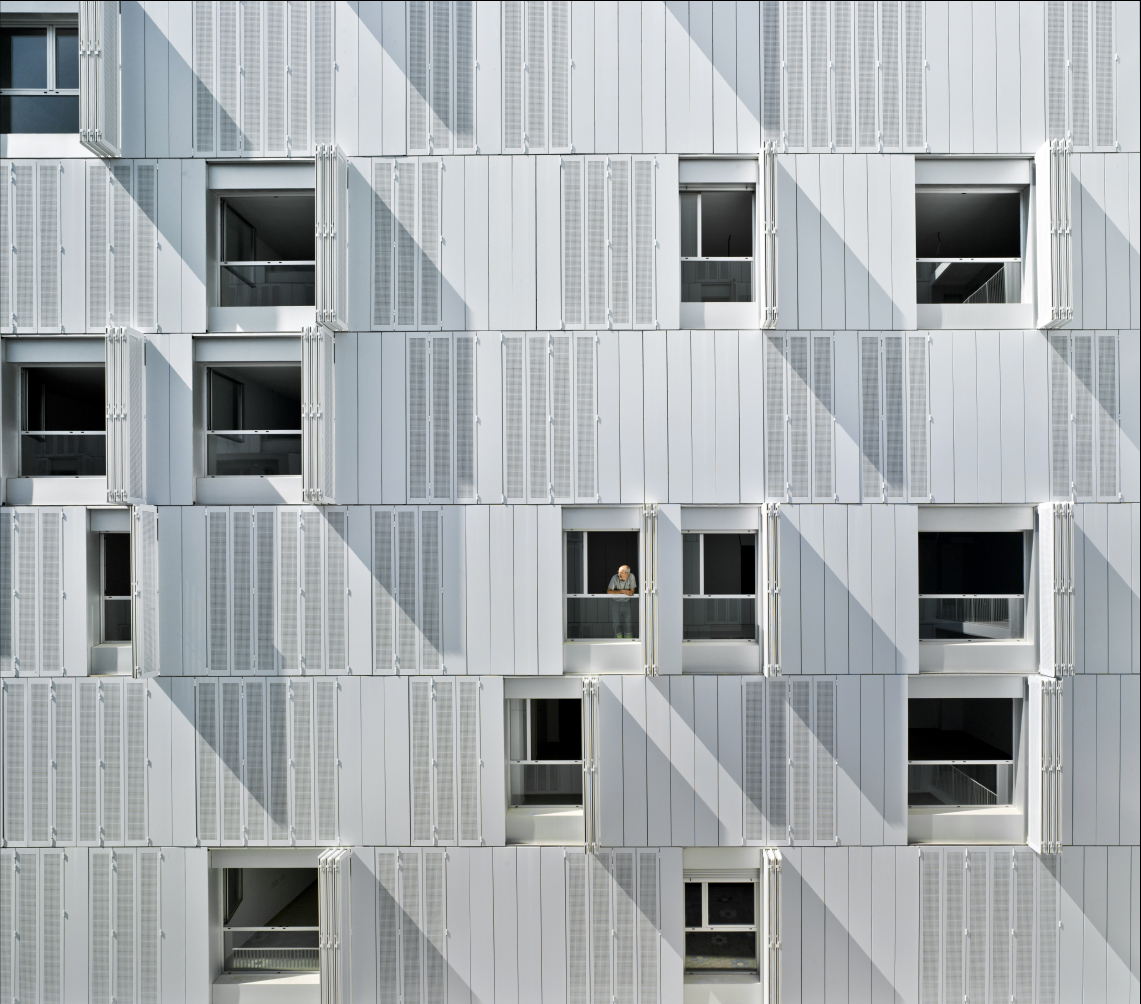 This façade concept is based on a visually homogeneous treatment of the entire housing envelope, in which opaque and clear panels alternate, with greater or lesser degree of permeability depending on the location and orientation of it. By doing this, it was sought to reduce the energy demand from the lighting and air conditioning of each of the homes and visual control of the outside through large glazed areas was attained for the inhabitants, maintaining privacy. To resolve the proposal, MCEA ARQUITECTURA and NAOS ARQUITECTURA opted for a CORTIZO FR (Fire Retardancy) Composite Panel ventilated façade system <span lang = "ES-TRAD", a sustainable, efficient, economic and aesthetic constructive solution, consisting of a 4mm panel with two 0.5mm aluminum sheets and a 3mm thick central core made of mineral and polyethylene compound developed to meet the highest fire requirements set by current regulations. The outer face is lacquered with 25/35 micron PVDF paint in arctic white, giving the envelope a unique aesthetic, while the inner face used protection primer for surface treatment. The half-shutters were solved with a microperforated panel superimposed on a folding frame.

The use of a light material such as the composite panel on the façade is not a trivial matter, since the construction is erected in an area with a significant risk of seismic activity. Therefore, materials that would fracture or unhook in the event of movement of the structure should be avoided, as might occur, for example, with stone. Fter all, being located in a seismic zone strongly conditioned the project both in the design of the structure (way the stairs cling, location and dimension of expansion joints, structural type of bidirectional waffle slabs) and in the choice of construction systems, to guarantee stability and fixation in case of movement. 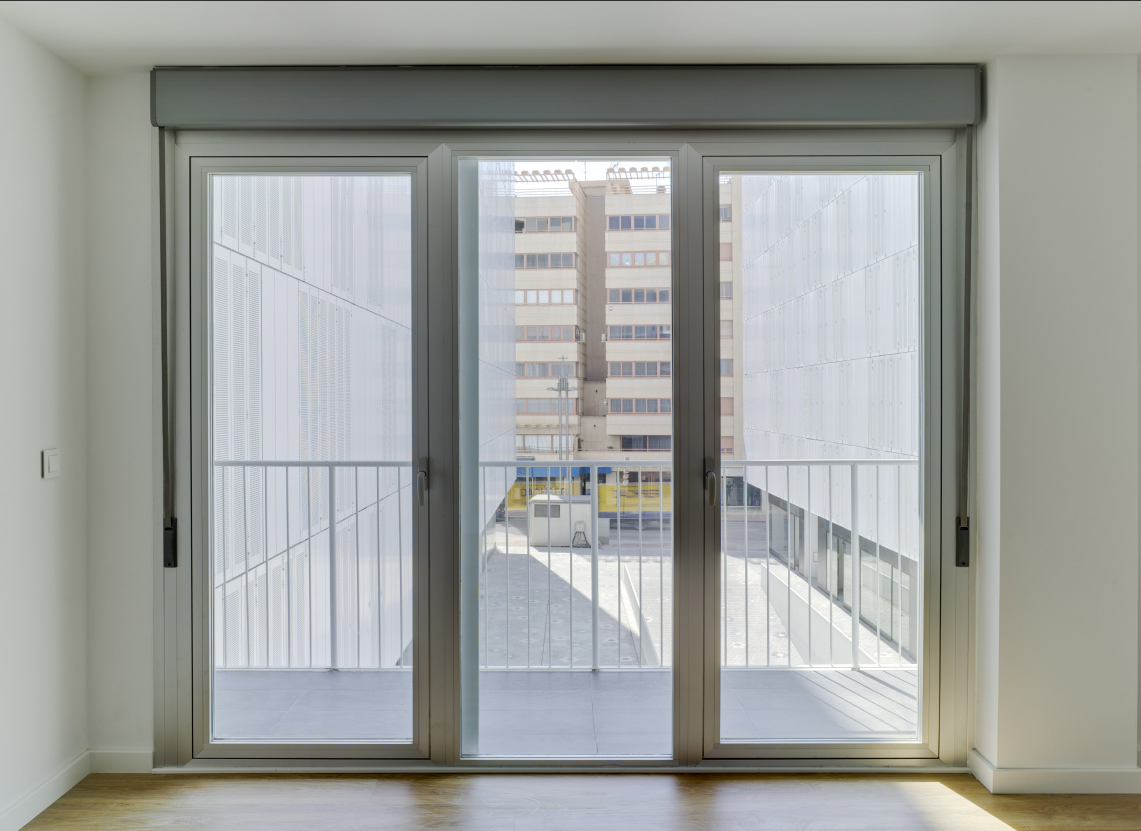 In addition to the ventilated façade, the CORTIZO carpentry with thermal break also contributed to the energy efficiency of the complex. In total, 715 windows and balcony doors with a gray anodized finish were installed, placing the COR 3500 hinged on the exterior façades and the 4200 Slider in the inner courtyards. The installation of windows with thermal break notably improves comfort inside homes, reducing energy consumption and minimizing condensation problems.

The San Mateo Housing reconstruction began welcoming its inhabitants in June of last year. Five years after that fateful May 11, 2011 in which the earth shook, Avenida Juan Carlos I de Lorca recovered the life and activity of one of its most emblematic spaces. Everything had changed, except the site. 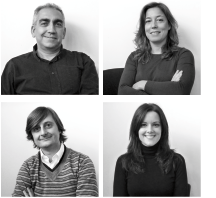 NAOS Arquitectura has been developing projects since 1991 in both the public and private spheres with the aim of offering unique and innovative proposals, linked to the idea of ​​environmental integration, quality and flexibility. At the head of this architecture studio based in A Coruña are Santiago González (director), Paula Costoya, Mónica Fernández and Miguel Porras, who lead a large team of professionals. NAOS has as main objective the creation of buildings and spaces that respond to an optimal functional programme with a sustainable environmental design and with minimal maintenance costs. They carry out national and international projects of residential blocks, sports and cultural architecture, urban spaces, green areas, commercial and hotel areas, administrative buildings, hospitals, education centres, as well as the restoration of historical buildings. 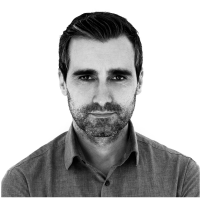 MCEA | Arquitectura is a Murcian studio directed by Manuel Costoya, an architect certified by ETSA A Coruña (2004), he completed his training at the School of Architecture of La Villette (Paris) and ETSA in Madrid, where he has completed the Diploma of Advanced Studies (DEA). A multidisciplinary team of architects, engineers and draftsmen collaborates with him. The study was born in 2008, focusing its interest in the development of architecture and urban planning projects of different scales and uses, ranging from single-family homes to large public facilities. Since the beginning of its activity, it has tried to diversify its work with public and private promotion projects in multiple locations such as Ibiza, A Coruña, Lorca or Alicante, dedicating to all of them the same effort to constructing a simple architecture that pays special attention to the small details.