Participating in the new Corporate Headquarters of the Idom Group in Bilbao was an ambitious challenge for CORTIZO from the beginning. The demands of a project of such magnitude, signed by one of the world's leading engineering benchmarks, were not an easy task.

The close collaboration, between the Department of Architecture and Engineering and the R&D Division in Light Façades of CORTIZO with Javier Pérez Uribarri, author of the project and head of ACXT, the Bilbao engineering architecture firm, was essential to ensure the correct materialization of the architect's creative freedom and, at the same time, manage to maximize the strict premises of sustainability and energy efficiency established. All this accompanied by the impeccable execution carried out by VIFASA, a company specialized for more than 20 years in the integral glazing of façades and envelopes at a national level, which also knew how to adjust to restrictive construction deadlines. 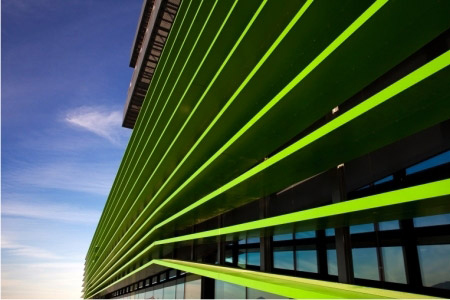 Located in the former free warehouse of the Canal de Deusto in the Port of Bilbao, the project responds to the innovative and colorful recovery of an old port customs warehouse that today houses nearly 700 professionals. With a surface of 14,400 m2, distributed in 5 floors, dedicated to offices, research and development spaces and social spaces, the new Corporate Headquarters of the Idom Group, the bulding stands as the new icon of the Biscayan capital.

One of the architect's objectives was to give the building's architectural envelope a great uniqueness, consequently, he resorted to an interior skin solution between slabs resolved with the Intercalar Facade, and an exterior skin of 600 mm blades, designed “ad -hoc ”by Pérez Uribarri wich "provide high sun protection, without compromising views from the inside, to help control solar radiation and, therefore, energy consumption” says the author of the project.

"The Glass Spacer Façade, which functions as a general external enclosure, has taken the form of consecutive vertical vision modules, separated by opaque modules to achieve the hidden passage of the interior pillars," says Domingo Brión, Director of the Department of Architecture and Engineering of CORTIZO. “In relation to its placement, the system has been assembled as modules between slabs and its profiles adopt the necessary section by calculation in order to adapt to the demanding conditions of the construction environment. Externally, the horizontality of the modules is achieved, due to the absence of a profile in the vertical direction, but also thanks to the system's flexibility. A flat cover along the perimeter was chosen for this project, in order to allow the meeting of different materials on site. To give restricted maintenance access to the exterior grid area, the Cor 60 system has been used, maintaining the exterior aesthetics, through the placement of glass attached to said system ”. 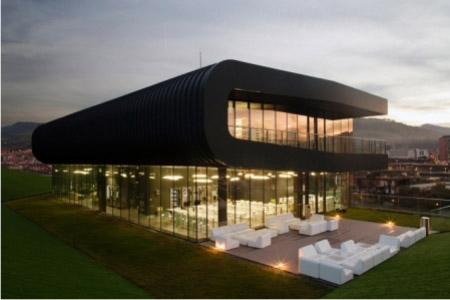 According to Pérez Uribarri, "the outer bladed skin constitutes the extension of an imaginary green carpet made up of a vegetal façade placed on the roof of the building, in the manner of something that has been stretched by the facades and folds up." “During the project process we developed several and diverse designs, finally opting for a horizontal solution, the one with the optimal balance between aesthetics, cost and maintenance. The fact that it had a very dense weft of blades and a flight of at least 600mm to achieve the shading required by the building's thermal calculations”, says the ACXT architect.

On the one hand, the need to hold the blade, only on the back, and on the other, the resistance to the combined stresses of its own weight, snow load and and wind suctionand pressure were presented as conditioning factors of the design.

“With the purpose of optimizing the architect's initial design, Cortizo presented an alternative more suited to the real possibilities of extrusion and assembly. It consisted of a sufficiently strong base profile and two bodies crimped together and, at the same time, with the base profile, secured by a mechanical screw fixing at certain intervals”, affirms the Directorate of the R&D Division in CORTIZO Light Facades.

Once the project was entrusted to the installer, the façade company VIFASA, a fine recalculation of the loads and solicitations was carried out, using Finite Element software, which showed that the blade needed a little more consistency to support them, so it was finally chosen to refer the resistant part of the blade to a steel element, which would be hidden once the main body was assembled. The blade bodies were also reinforced by adding two more central ribs per body. Finally, a crimping system was designed that allowed a quick positioning of the secondary body, its gravity and geometry taking it to its place immediately. A fine neoprene sheet was in charge of ensuring that there was no contact at any point between the support or the main body of the blade, which, however, required specific machining to allow the penetration of the “U” bushing.

Furthermore, the location of the building, in the vicinity of the Nervión River, compromised the façade systems, wich would face the corrosion attributable to the marine environment and very high wind loads (roughness level of the environment = I - by a sea or lake-, according to CTE), which was solved with a RAL-6010 matt lacquer color using high-durability Class 2 superpolyester paint, with a thickness always greater than 80 microns.

The spans in the roof floor's rest area were resolved with the Cor Vision series. This sliding system with thermal break has an exposed section of only 20 mm in the centre junction section, which encourages the luminosity of the rooms and allows its users to enjoy, to a greater extent, the privileged environment.

In the emergency exit areas, the Millennium Plus Door was used, due to its flush aesthetics, its robustness and its high thermal and acoustic performance.

The building has innovative energy efficiency measures such as photovoltaic panels, very low-consumption sanitary equipment and taps, rainwater storage on the roof, automatic lighting regulation system, and an unique dissemination system by displacement and air conditioning by water, that along with the solar protection blades and the eco-efficient CORTIZO carpentry systems, grants the building an energy saving of 60% of the normal consumption of a building of this type.