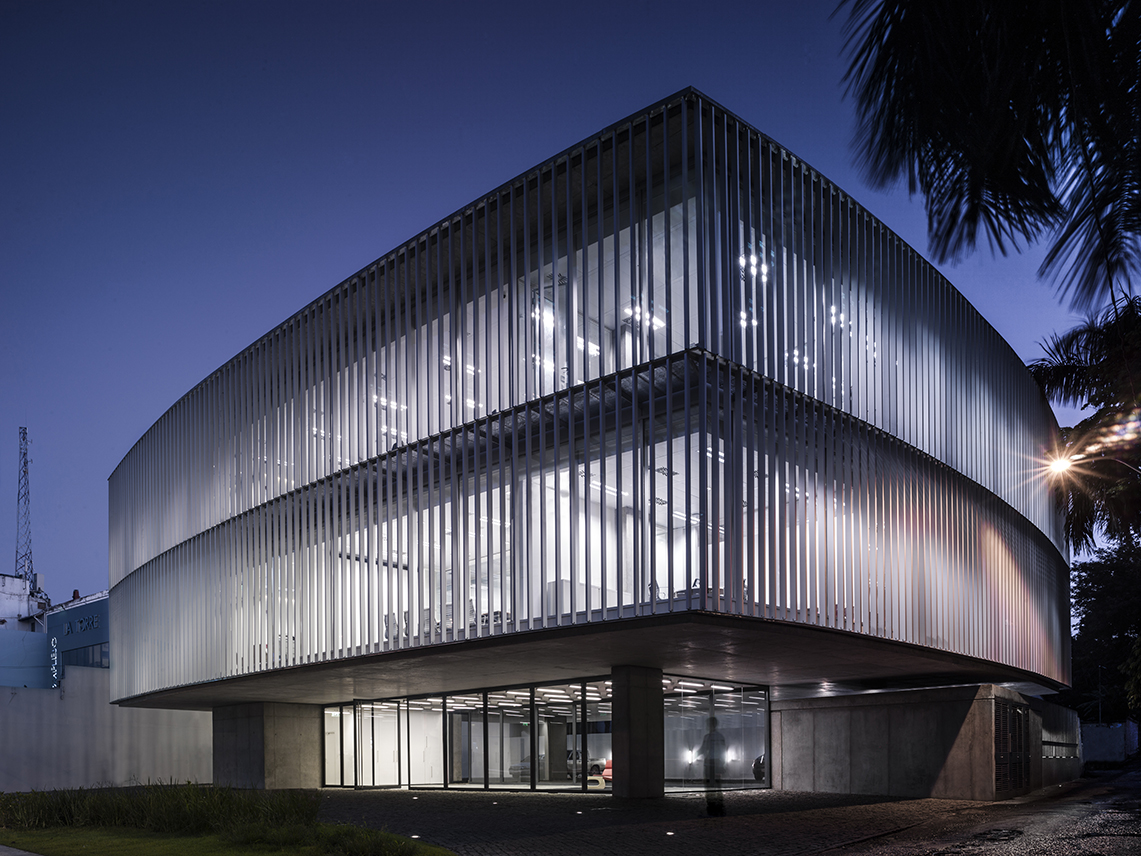 The Puma Energy Paraguay headquarters is located on Avenida España (Asunción), one of the main arteries of the capital, with a high volume of traffic and in full transformation. In this environment, buildings of two and three heights intermingle with the vegetation, as well as with electric poles, billboards and cables. The corporate headquarters is located on a corner plot, which gives it great visibility and contact with urban traffic. 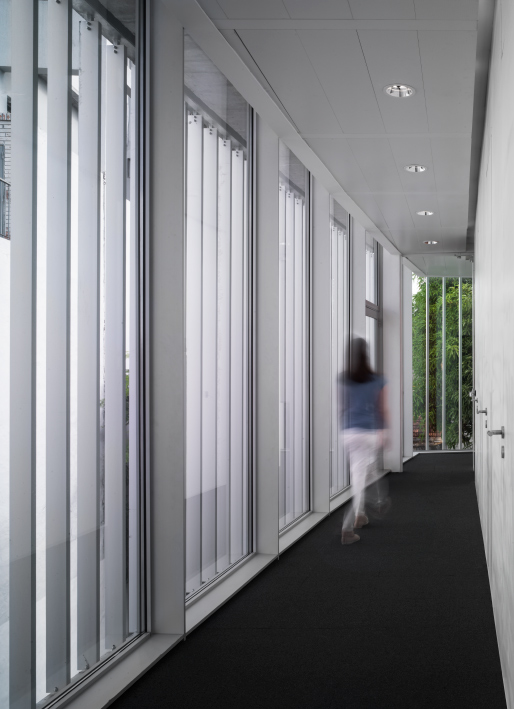 Taking advantage of this situation, it arises from the ground on four concrete pillars releasing the ground floor and facilitating a direct connection between the city and the building. Thereby concentrating the workspaces in large volume, surrounded by vegetation and isolated from the street's bustle. The project has a clear urban vocation. The ground floor is conceived as a flexible space, without a specific programme, in direct relation to the street and covered by the large slab in the upper volume. The space delimited by the four supports has an enclosure composed of a series of concatenated doors that allow modulating the relationship between the lobby and the street, thus determining a variable limit that adapts to different programmatic requirements. It acts as a space in which the interior and the exterior are blended, as well as its public and private character. In addition, the exterior cobblestone pavement extends into the interior of the building introducing the street into the lobby. The office volume is supported only by four props in order to favor not only the creatin of a liberated ground floor, but also completely open office spaces and without structural obstacles. Thus, the perception of spaciousness and flexibility is favored for possible distribution modifications in the future.

The horizontal structure is materialized in bidirectional post-tensioned slabs, avoiding large edge solutions and allowing the necessary compactness of the volume in section due to the height limitation by municipal regulations set at 12 meters. The bidirectional post-tensioned slab edge optimization occurs thanks to the interior location of the pillars, which generates a cantilever around the perimeter as a great threshold for public access. From a structural point of view, this location compensates for the large interior spans of approximately 15 meters.

The façade solution is conceived with a dual purpose. On the one hand, it's design allows the maximization of natural lighting while reducing the thermal load due to direct sunlight. On the other, it has been presented as a slight veil; like a cloud of slender aluminium profiles with a dynamic perception. In this manner, the building creates a visual dialogue with the user, as the user moves around it. This proposal by Ruiz Pardo-Nebreda was resolved with a CORTIZO curtain wall; on which a double skin of extruded aluminium solar protection louvres were placed for regulation of the incidence of the sun, partially hiding the slight façade and give the building envelope a unique aesthetic. In total, 624 m² of the Equity façade system were used to enclose the two upper floors, a solution characterized by its minimalist aesthetics and slender profiles, with an interior viewed section of only 18 mm in both mullions and transoms, thus facilitating maximum light entry into the building. In addition, mullions and transoms also equal its depth, giving rise to a flush mounting that provides aesthetic uniformity to the interior of the façade. The glazing is carried out by fixing the glass both vertically and horizontally using an aluminium continuous pressing profile hidden under the cover or embellishing profile, opting in this case for a rectangular cover with an exposed section of 52 mm. In addition, the great variety of profiles and existing mechanical connections for the new generation of CORTIZO façades made it possible to execute this curtain wall with corner glass joints at 90°. On the other hand, the flush mullions and transoms for 1st, 2nd, and 3rd level, the continuation parts, the pipettes, the tear strip gaskets and the totally vulcanized angle guarantee the absolute watertightness, drainage and water evacuation of the enclosure. The Equity façade also stands out for its excellent thermal and acoustic performance, based on its wide thermal break area and a glazing of up to 50 mm, characteristics that are reinforced by the excellent results achieved in the AEV test benches and the obtaining of the CWCT certification according to demanding regulations. 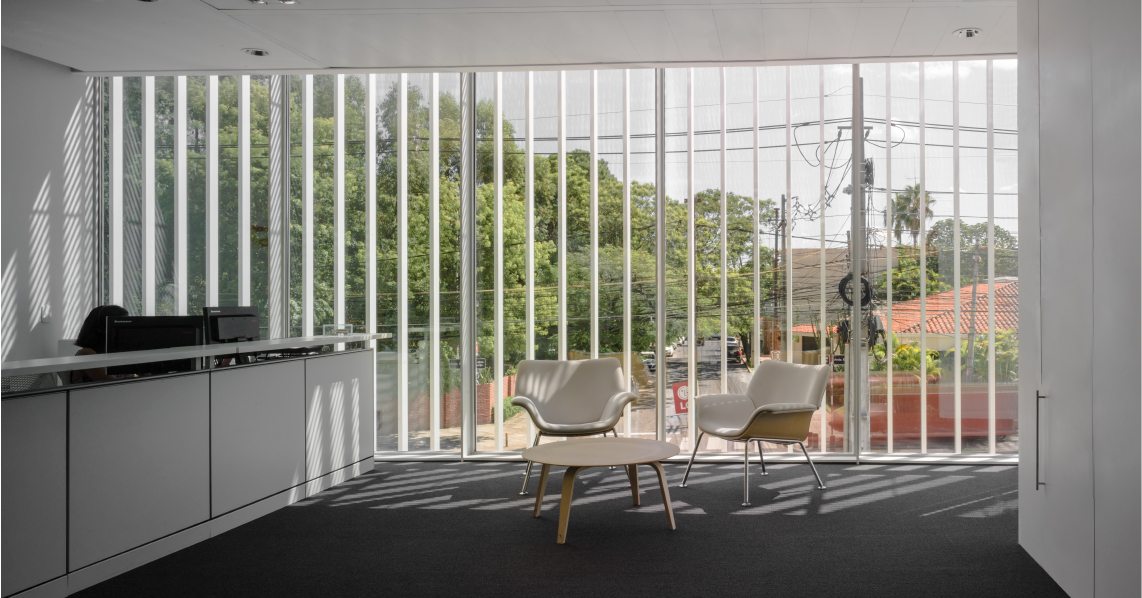 Wrapping the curtain wall is that dynamic perception cloud formed by tubular aluminium louvres 4187 mm long and 4 mm thick in a gray anodized finish, with a rectangular section of 120 x 40 mm. This solar protection system configured by special extrusion louvres allows light filtration, while attenuating the incidence of the sun on the interior of the building.

The slightly curved outline of the building stresses the relationship with its immediate surroundings, moving closer and further away from neighboring buildings and nearby trees. The addition of these vertical profiles arranged on the slightly curved facades, allows a dynamic and vibrant perception from the street and the vehicles passing through it. The resulting view is that of a light and slender veil; an abstract and dynamic urban block that separates from the ground and is suspended in the air. 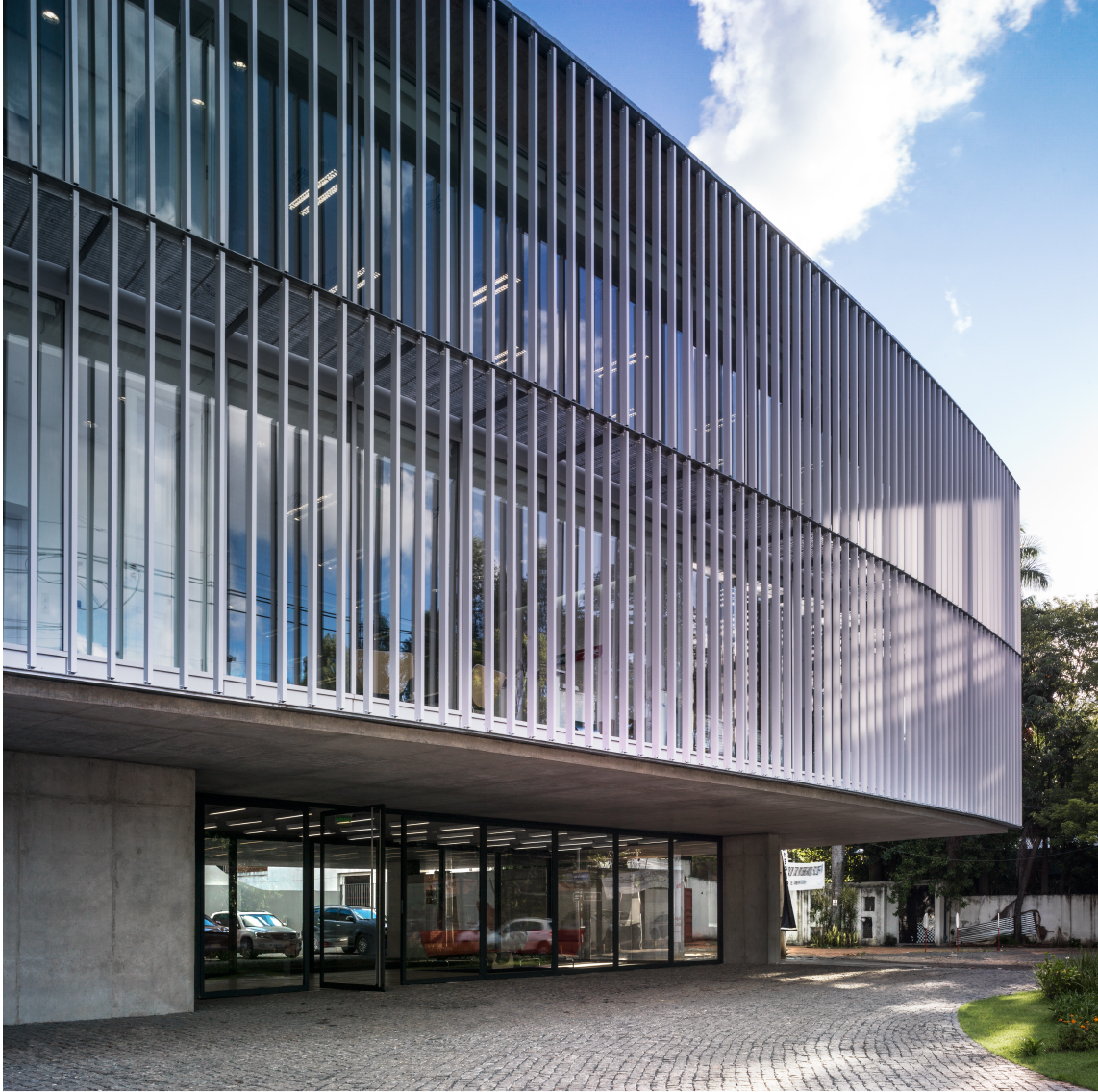 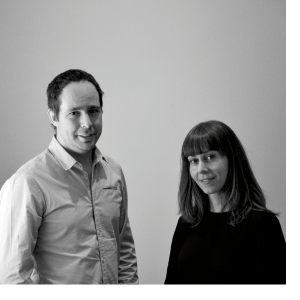 Ruiz Pardo - Nebreda is an architecture and engineering studio based in Madrid founded in 2011 by Marcelo Ruiz Pardo (architect) and Sonia Nebreda (building engineer) as a multidisciplinary team that operates throughout the world according to an adequate balance between local knowledge and global experience. They have completed constructions in Puerto Rico, Namibia, Paraguay, Zambia, El Salvador and Spain, which have been published in architecture magazines and have been exhibited in International Architecture Biennials in Argentina, El Salvador and Ecuador, as well as in collective architecture exhibitions in Japan, the United States, Germany, Spain, Italy, Ireland and Switzerland.

Their work has recently been recognized with the Grand Prize of the XII Biennial of Architecture and Urbanism of El Salvador (XII BAUES 2016), the German Design Award 2018, the International Architecture Award 2017, the S.ARCH Award 2017, the NAN Prize 2017 for the best project of a Spanish study abroad, the Luis M. Mansilla Prize 2016 and an American Architecture Prize 2016, among other important awards.

Marcelo Ruiz Pardo studied Architecture at the Madrid School of Architecture (ETSAM) and at the University of Genève. He is an associate professor of Projects at ETSAM and has been invited as a critic and speaker at universities in the United States, Puerto Rico, El Salvador and Japan. He is currently a PhD student at ETSAM and a member of several Research, Teaching Innovation and Cooperation Groups at the Polytechnic University of Madrid and the University of Alcalá.