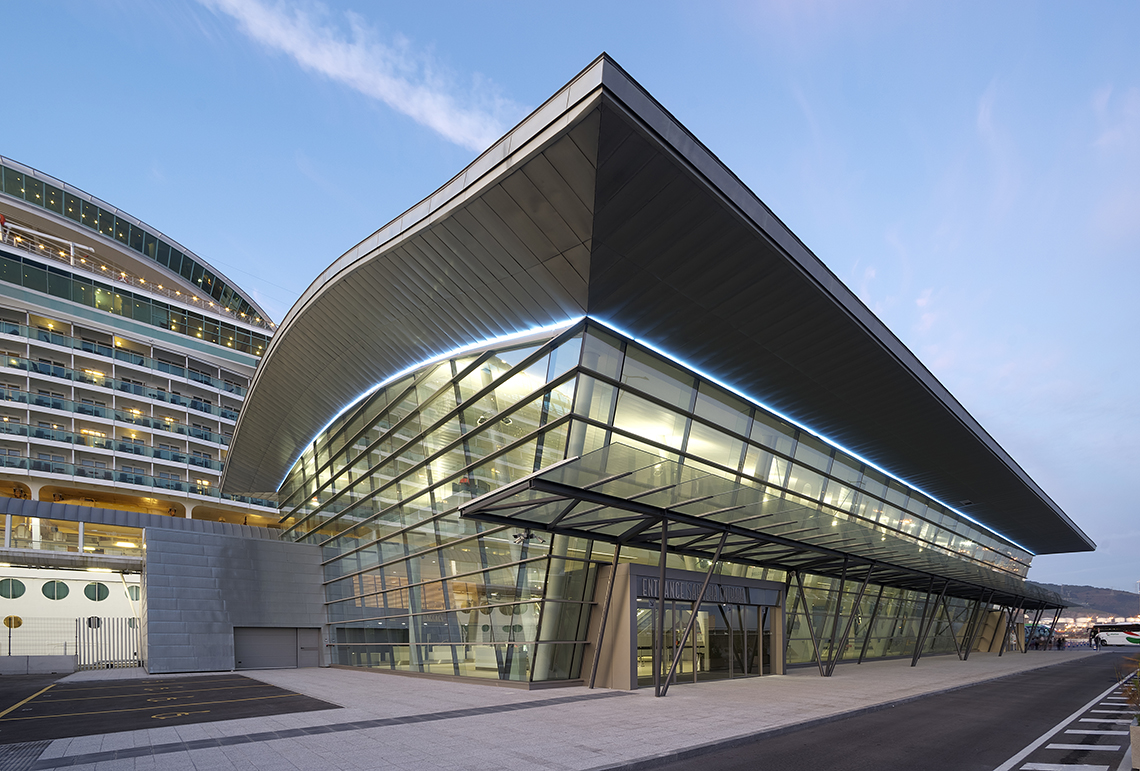 The new Getxo Cruise Terminal appears like a large glass container protected by a large light zinc roof, a volume that rises above the central area of ​​the dock attached to the Algorta counter-dam, reaching out to the arrival of the ships with its south face.

Designed by the Bilbao study Ajuriaguerra Tres Arquitectos, the new Getxo Cruise Terminal is presented as an easily recognisable building with simple geometries, a curved roof prism whose opposite longitudinal faces (north-south) are subtly inclined, thus printing an image of lightness and dynamism to the infrastructure.

The building rests on the dock attached to the Algorta counter-dam, a landfill defined by a series of ballast modules. Based on the existing geotechnical information, a ribbed foundation slab with a variable edge between 0.40 and 1 metre was designed in order to evenly distribute the building's weight upon the ground and avoid sunken foundations. 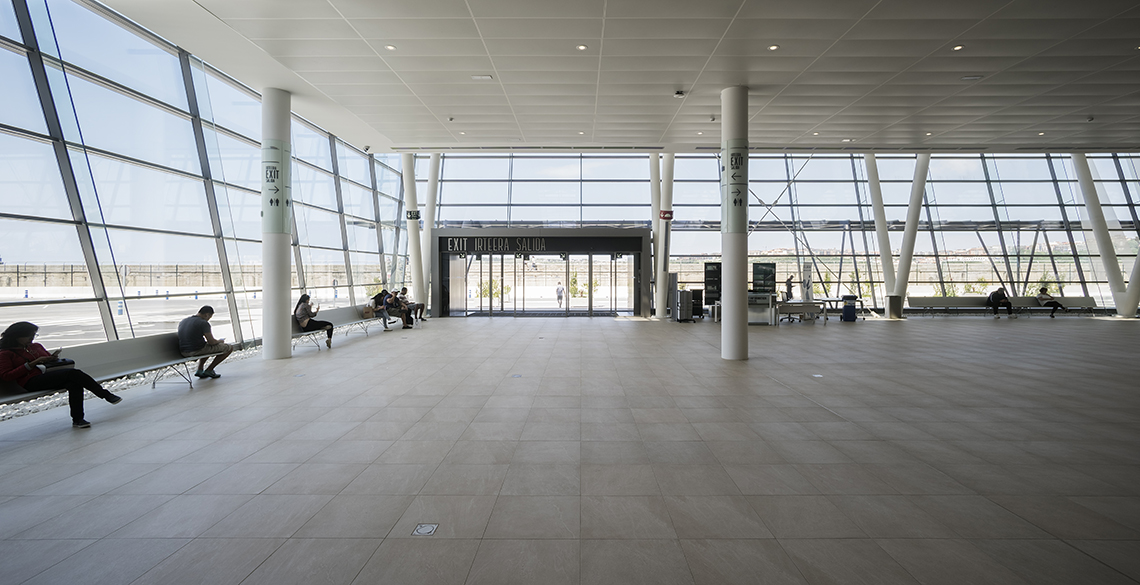 The Getxo Cruise Terminal structure is provided by a system of pillars and metal trusses that form the skeleton on which the roof rests and from which the curtain walls that serve as lateral enclosure are suspended. The site starts as a rectangular floor plan 57 metres long and 28 metres wide, developing on two main levels, establishing the accesses to the dock at sea level (+0.00 m) and the boarding and disembarkation areas at 6.80 m above sea level. In addition, an intermediate level (+3.40 m) has been proposed where various of the building's service will be developed. The busiest spot is the ground floor: boarding area, bag drop, communication elements to the upper floor, baggage claim area, departures, and common areas. The offices linked to the activity of the terminal, the VIP room and the Police and Civil Guard offices can be found on the mezzanine; while the waiting area, boarding, landing and common areas are located on the first floor. 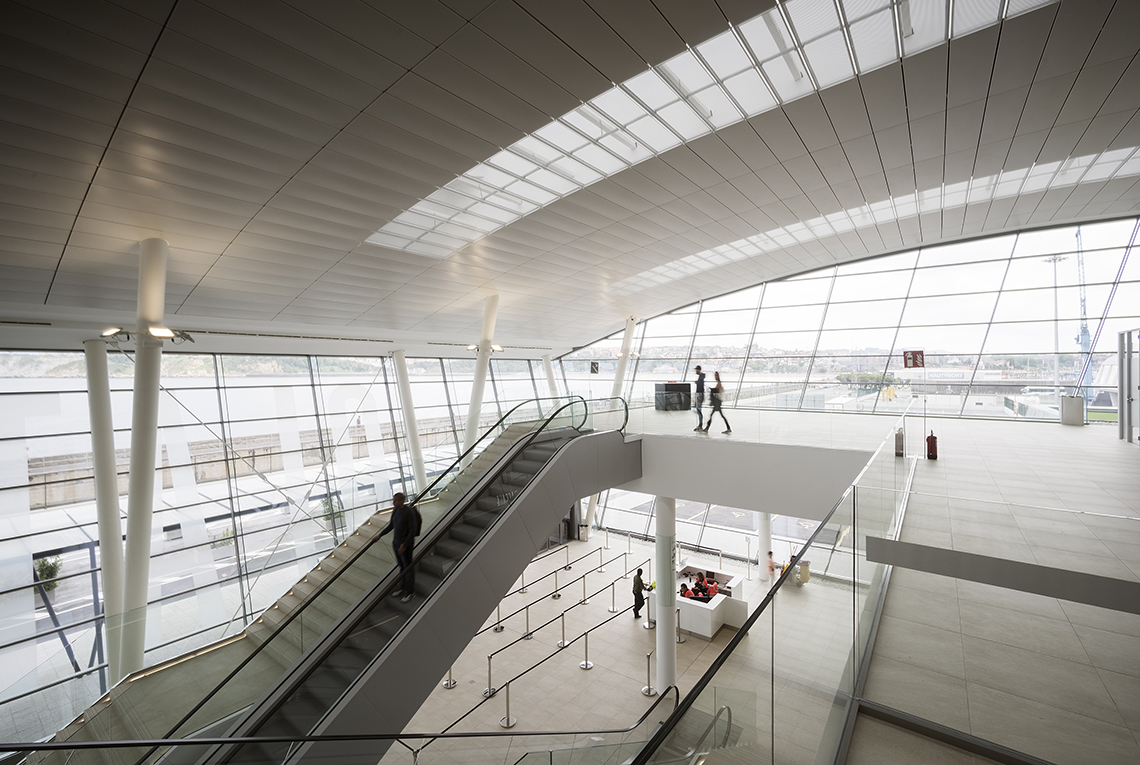 All floors communicate through elevators, escalators and staircases, the latter protected by CORTIZO's View Crystal Plus railing, installed by the Uxama company. Altogether, 200 linear metresof this railing system have been installed, characterized by its minimalist design, based on a U-shaped aluminium profile that supports tempered laminated glass only at its bottom. This solution meets the highest security requirements of the CTE, enduring a load of 3.0 kN/m applied to 1.1 m of its bottom side. For this reason, this railing is ideal for public spaces with a lot of traffic, such as this cruise terminal, where it has also been used to delimit the common areas on the first floor.

On the other hand, the access from the building to the boarding area takes the form of a walkway attached to the building consisting of a reinforced concrete slab that is supported on a system of mixed pillars that conclude with a metal canopy.

The new Getxo Cruise Terminal appears like a large glass container with an envelope resolved by the Uxama technical department with CORTIZO curtain wall . The CORTIZO Architecture and Engineering Department collaborated closely with the Ajuriegurra Tres Arquitectos studio and with Fachadas Singulares Uxama, a member of its network of installers in the Basque Country, to respond effectively to the particularities of the project. Altogether, 1,330 m² of curtain wall were installed, arranged as a supporting structure made up of aluminium mullions & transoms with a cross-section of 52 mm and lacquered in gray. It is a traditional or stick system in which the glass is fixed to the horizontal edges by combining a continuous pressure profile bolted to the transoms and hidden under the embellishing profile or cover, which, in this case, has an elliptical shape. In order to maintain the aesthetic uniformity of the covers on the four sides of the building, it was necessary to develop a special pressure profile for the north and south façades, thus guaranteeing that the covers are fully frontal in this part, despite being installed on a sloping curtain wall.

One of Ajuriaguerra Tres premises was to project a dynamic-looking building on the Algorta outer harbour wall. This has been possible thanks to the great variety of profiles and existing mechanical joints for the new generation of CORTIZO façades that allowed the execution of the curtain wall with an inclination of 15° on the north and south faces, totally vertical on the east and west, and with glass encounters in the four corners. Since the envelope reaches heights of 10 metres slabs free, the mullions have vertical glass buttresses inserted on their internal face, made up of laminated glass formed by four extra-clear, 10 mm thick, thermo-hardened windows, joined by SentryGlas sheets. Because of this the inertia of the envelope is improved, keeping the avant-garde aesthetics of its interior face intact.

CORTIZO's light façades stand out for their excellent thermal and acoustic performance and excellent results achieved on various test benches. In this instance, we are talking about a curtain wall with thermal break resolved from high-performance insulating glass composed of laminated safety exterior glass formed by two 8 mm heat-strengthened extra-clear panes joined by four PVB butyrals; Laminate provided with a selective layer, a 16 mm dehydrated air chamber with an aluminium interlayer profile and sealed with silicone, and an interior laminated safety glass made up of two 6 mm extra-clear panes joined by two PVB butyrals. In addition, the as flush mullions & transoms for 1st, 2nd & 3rd level, the continuation parts, the pipettes, the tear strip gaskets and the the totally vulcanized corner guarantee the absolute water tightness, drainage and water evacuation of the enclosure, a matter of utmost importance both due to the location of the terminal, at the foot of the Cantabrian Sea, and the area's climate, with adverse weather conditions throughout most of the year.

The base profiling of the curtain wall has also been used by Uxama for the implementation of the six skylights of the dome that allow light to enter the building. In addition, the new Getxo Cruise Terminal has carpentry of the COR70 Industrial series, inserted in the opaque part of the south façade and delimiting the ground floor and the mezzanine office area, providing these areas with large glazed surfaces and the possibility of openings to the outside.

Also noteworthy is the use of CORTIZO Composite Panel to cover the exposed face of the dome overhangs, a solution implemented by the METABI company. This system is perfect for this type of application due to both its aesthetic possibilities and its excellent mechanical properties: high impact resistance, high rigidity and low weight. In this case, it has allowed the creation of a gray toned visor which gives the building that dynamic appearance promoted by Ajuriaguerra Tres since the projects initial stages. 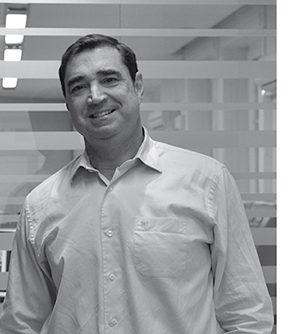 Ajuriaguerra Tres is a studio from Bilbao that specialises in architecture and urban planning. Directed by Pablo Estefanía Angulo (Bilbao, 1961); the architect and urban planner graduated from the Higher Technical School of Architecture of Madrid in 1987. Pablo Estefanía leads a multidisciplinary team of professionals and collaborators (architects, urban planners, lawyers, engineers, senior technicians, planners, draftsmen, sociologists, geographers, geologists, topographers...) with extensive experience in this type of projects and interventions.

Ajuariaguerra Tres aims to serve all the needs in the field of planning and building. This encompasses the set of actions that constitute the process of gradual acquisition of urban planning authorisations and, consequently, give the land both urban and building value.

In addition to the Getxo Cruise Terminal, this Bilbao study developed projects such as the Botafoc Maritime Station in Ibiza, buildings for tertiary and industrial use for the Haizejolex, Inbisa or Petronor companies; collective and single-family housing projects in the Basque Country and Ibiza, or educational centers such as the Ikastola Betiko in Leioa or the Ikastola in Etxebarri.